Getting my fish on at Lure Fish House

Half of EMC headed out to Camarillo for some seafood and he brought his mom along to get in on some extra food and because that way I don’t look so lonely eating at places by myself so much.  Now I know what you’re thinking. “Mikey you have a mother? You’re telling us you weren’t hatched in some government lab? “

Yep it’s true.  I have a mom and she’s the best mom in the whole entire world.  Now I know you’re saying to yourself, “Yeah she might be great but my mom’s way better.”

I’m sorry to break down your walls of illusion but all mothers pale in comparison to mine.  Not only is she the best mom since the dawn of man, but she is also a great person to bring along for a great fish dinner.  We originally wanted to hit up a new Mexican joint down on Ventura Blvd, but it was closed so she suggested Lures after having been there a few weeks ago. 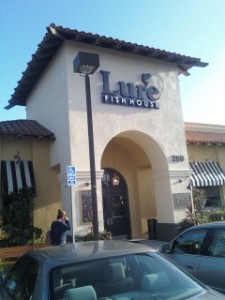 Lure is your top of the line modern seafood restaurant.  It’s got that steakhouse Outback, Wood Ranch kinda feel except with fish.  It’s a huge place so it is perfect for your big party get-togethers, but a little more difficult for one on one dinners. Being that it’s large and open, its hard to hear who you are talking to and you pretty much hear everyone around you.  Very clean, very modern, and very open.

The staff are all very nice without being too Disney and our waiter was very customer service oriented. He was ready and willing to answer questions which with my mom is a must ’cause she has more questions than Trivial Pursuit (the deluxe edition that comes with 5 thousand more questions). The menu is simple and has plenty of dishes. There is a great variety of appetizers and entrees. They even list dishes that show which meals use fish that were not farmed or caught in mass fishery nets run by the man.

They also cook with some of our local fish caught right here in Ventura waters. They have a few entrees using our local rock cod which I think I’ll try next time.  Having caught it and cooked it myself, I’d love to see if it’s better than mine. END_OF_DOCUMENT_TOKEN_TO_BE_REPLACED