As you all know, B and I just finished up a trip to San Francisco to get my hoopty.  On our way back down south I wanted to get B to this pizza place called the Klondike Café.  It’s a cool little joint in the town of Arroyo Grande.  They have some great pizza and a really great atmosphere. 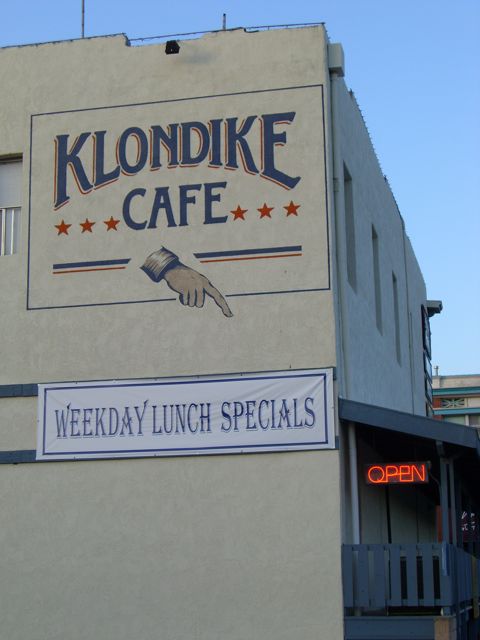 I’ve known about Klondike for a while.  I used to live in Arroyo Grande for a few years and have a couple of good places we will be adding to the EatMeCalifornia map.  Klondike Café is a stop you should definitely add.  They are in the basement of a building on Grand Ave, in the little old town of AG.  It’s Alaskan style pizza in a very cool tavern-like atmosphere.

You truly feel like you’re coming in from the cold, into an old-fashioned tavern, for a beer and a slice.  The best thing of all is that you get baskets of peanuts and you can toss the shells right onto the ground.  Plus they have a moose head on the wall and if that doesn’t signify a great place to eat pizza and drink beer I don’t know what does.  Plus, if that doesn’t get you all excited, they also have a great bar piano and Kazoos!

Mike, the owner of Klondike Cafe, actually raced in the Iditarod which, for all you non-worldly people, is the famous dog sled race.  He was a champion musher.  No, that doesn’t mean he was great at crushing things.  I’m personally glad he decided to put the dog sled racing behind him, to work on pizza, because he makes a great one.

This is the type of pizza that is low on dough.  They don’t do the high rise crust and stick to more of the Round Table and Toppers sort of style.  I like this style when it comes to the spicier style pizzas.  Also, Klondike is probably the first pie we’ve added to our list that does not hide their sauce.  They give you plenty and it’s awesome.  It has this great little kick to it, that is just enough to be noticed.  And they have a friggin’ moose head on the wall people, come on! 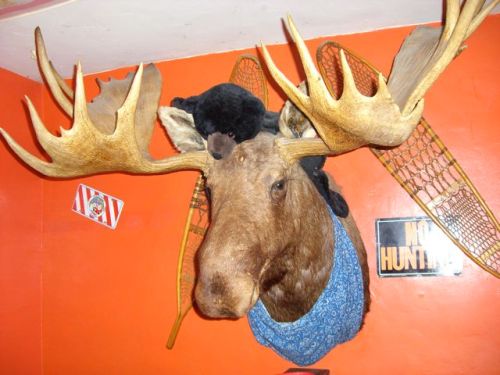 Here are my scores:

Sauce: – 9 It’s a tomato, basil, garlic sauce and has a nice little kick to it. Great pizza for cold days.

Dough – 5 This one is harder to judge because it’s a thin crust pizza. If you like thin crust it’s great, but if you want the thick crust you may have some issues.

Cheese – 8 I dig their use of cheese, they give you plenty and they add a bonus layer of cheddar in the middle. 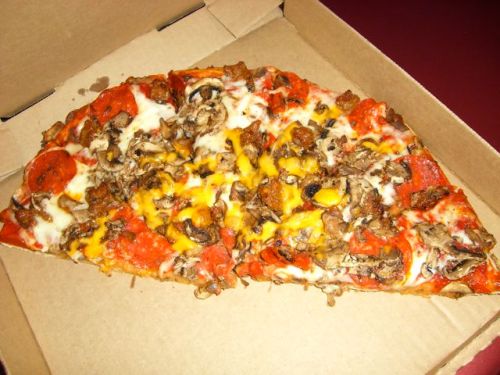 Toppings – 9 They have pretty good toppings, with their Italian sausage being the best.  Great juicy chunks of sausage.  The mushrooms were good; they cut them thin so they do get a bit overcooked. The pepperoni is average.  One of the cool things is they have a lot of different toppings to get, including reindeer sausage.

Overall – 8 It’s a great pizza when you’re coming in out of the cold or if you’ve just finished softball practice. It has a nice spice to it and the sizes are good for a family. The prices are right in there with everywhere else and it re-heats well.  I popped a couple slices in the toaster oven the next day and they were awesome. Cheddar is a very cool extra with this pizza.

Pitchers of beer, songs on the piano, peanuts to de-shell and throw on the floor, it’s good stuff people! Plus let us not forget the moose head.

Here are B’s thoughts on Klondike:

Sauce – 9 (Plenty of it and it had a little spice to it.)
Dough – 4 (Too thin, more like a cracker with sauce, cheese and toppings.)
Cheese – 7 (Pretty average as cheese goes; the added cheddar was cool though.)
Toppings – 9(Sausage was awesome, huge chunks of it.  Mushrooms were a little overdone and the pepperoni was average.)
Overall – 8 (The atmosphere was cool.  Bonus points for the peanuts and being able to throw them on the floor.  Good place for kids.)

This is our highest scoring pizza so far and we will keep them coming.

Klondike is definitely a stop you should add to your travel list when going north. Plus, if you ever are going to Arroyo Grande or Pismo Beach give me a shout out.  I can give you some more good stops in the area.