My Date at Natural Cafe.

Sorry Mikey, I would have loved to eat greasy tacos with ya, but I had a hot date. 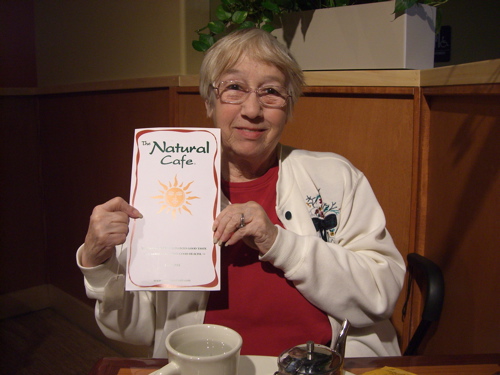 This is la madre de Brian.  We don’t get to hang out as often as I’d like, but I’m always happy when we get the chance.  Yesterday, she actually came out to my neck of the woods, which was pretty impressive since she’s still recovering from full knee replacement surgery.  So… she’s obviously gangsta.  Plus she has a handicapped parking pass for the next 6 months.

Anyway, I just wanted to introduce you guys to the woman in my life.  Hopefully she’ll be appearing in many more posts before all is said and done here.

On to the review…

So I have to admit that I’m no stranger to Natural Cafe.  In fact I used to go to the Goleta location back when I was a starving undergrad at UCSB.  Ok, so I was never really starving, actually I was kinda “husky.”

I didn’t eat at Nat Cafe all that often because I found sprouts and tofu to be a poor substitute for pizza and beer.  Now that I’m older, and can’t eat like I used to, I’ve decided to give this place another try.  Since they are right around the corner, I really have no excuse.

One of the reasons I asked my mom to come along was that I wanted her to experience the same bland, tasteless nutritious food that I have been eating lately.  Of course Natural Cafe offers many different kinds of food on their menu, including vegetarian, vegan and chicken and fish dishes.  I don’t think they have red meat, but I’ve had the chicken before and it’s pretty good.

So as we walk in, I first noticed that despite floor to ceiling windows, everywhere other than the place where you order is suffering from a total lack of light.  Seriously, most of the tables reminded me of those old school Italian restaurants where you eat your veal parmigiana in near darkness and no one can speak because you’d be interrupting ol’ blue eyes crooning through the hi-fi.

So that sucked, but the place was packed at the 1pm lunch hour so I grabbed a table for two in the back and we started to peruse the menu.  Like I said, they’ve got something for everyone here.  My mom got the 1/2 albacore sandwich and the creamy cauliflower tomato cheddar soup.  (Way to stretch out the name guys.)  I ordered the natural tamale, which has corn, green chile and ground peanut instead of meat inside.

While we sat and waited for our order to come, I grabbed our silverware and water and took some time to look around the restaurant.  Overall, the restaurant looks nice enough, the art was interesting and looked like it was locally produced.  Surprisingly, there were not a lot of granola types here (probably because we’re in Simi.) but like I said the place was full, so maybe the real hippies couldn’t get in.

As far as the food goes, my Mom liked her soup and sandwich and the only complaint was that the bread couldn’t quite stand up to the tuna.  It was falling apart so she thinks that maybe thicker slices are the answer.  The soup was good, and you could really taste all of the elements, including the cauliflower which usually blends into everything.  Between the soup and the sandwich, they certainly give you enough food, and for 7-8 dollars a meal it’s not too expensive either.

My tamale was okay, but it didn’t really feel like a tamale to me.  The outside and the inside were roughly the same consistancy, which is a no-no in my book.  I like it when the corn is a little more solid so that you can tell when you get to the stuff in the middle.  The black beans and brown rice they served on the side were pretty bland but a little salt and pepper made them edible enough.  Surprisingly, I would probably order this again, but there are so many other options that I really shouldn’t have to.

If you’re looking for a healthy meal for a good price then Natural Cafe is definitely worth a look.  Let’s face it, they’re not going to win in the flavor department so you’re consciously making a choice to reward your body instead of your taste buds when you eat here.

If you plan on eating lunch in this location, also plan on bringing your night vision goggles, or better yet, sit outside and get some fresh air to go with your healthy food.