So tonight, I was totally planning on doing a review on this Mexican restaurant that I went to last week.  But to be honest, it wasn’t that great and I was lacking the inspiration necessary to feign interest in the place.  Therefore, on a whim, I chose to make my triumphant return to Mama Rita’s in Newbury Park.

For those of you who haven’t read the Kitchen Nightmares debacle, check it out now before you jump into my post tonight. 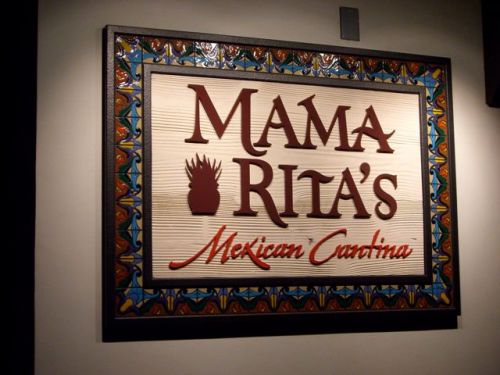 So I wanted to originally go back to Mama Rita’s with the crew that we took to the Kitchen Nightmares shoot.  But conflicting schedules, plus the fact that Michelle had a baby in the interim (congrats, btw!), made it a luxury that I just couldn’t afford.  I walked into the place at around 7:45pm and was greeted warmly by the owner’s mother.  She offered me a table, but since I was all alone, I opted to saddle up to the bar.

One of our main complaints last time around was with the service and more specifically, the speed at which things came out of the kitchen.  It was a slow night and like I said, I was by myself, but I can tell you that they had chips and salsa in front of me in less than 60 seconds and my meal (shrimp fajitas) was on the table in about 10 minutes.

The chips and salsa were a throwback to the days of the old Westlake location.  They’ve done away with Gordon’s pico de gallo and brought back their original recipe, which is a great thing in my book.  It looks like the menu has also reverted to times of old, but they’ve managed to keep some of the higher quality meats and also borrow some of the spices from successful dishes to incorporate into the less flavorful ones.

The last meal I had here was the mahi mahi and if I didn’t do a good enough job expressing my displeasure before, let me take another stab at it.  I wanted to order something different than the others at my table, but having to order the mahi was like getting picked last for kickball and then taking a line drive to the face from about 5ft.  Needless to say, I couldn’t muster the strength to give it another go.

My shrimp fajitas were great.  I ordered them mainly because I wanted to see if they’d try to get away with giving me 3 shrimp, like they gave Michelle last time.  I was pleasantly surprised to see that my fajitas had a perfectly acceptable 9 shrimp.  Not only that, but they incorporated the blackened Cajun flavor that I loved so much in their shrimp tacos.  The peppers and onions were also tasty and executed perfectly.

The only problem I had with the fajitas was the fact that I couldn’t eat them.  You see, they forgot to give me any silverware to work my magic.  Once I let the bartender know, he grabbed a setting for me and it was on like Donkey Kong.

With the fajitas comes a big plate of just about everything you could want: cheese, lettuce, pico de gallo, sour cream, guacamole and of course, beans and rice.  They give you your choice of corn or flour tortillas to go with the fajitas and I decided that flour would be the more appropriate choice.

Here’s where we get to my other gripe with the meal.  They only give you two tortillas.  For all the peppers and shrimp that were on the plate, I needed more eating vessels.

It seemed like an honest mistake so I asked the barkeep if this was standard practice.  He informed me that it was, but then quickly offered to get me some more tortillas.  This made me extremely happy because last time it seemed as though our server, although really nice, had no skills in problem solving.  This guy was all over it.

He was so on top of his game that he even offered me some of the house hot sauce, which is an awesome green salsa that has a surprising amount of heat.  Honestly, that sauce made the dish for me more than any other ingredient.

As far as the sides go, the guac was smooth and fresh and I enjoyed it very much.  The rice was about a million times better than the flavorless crap that was served on the night of Kitchen Nightmares and the beans were adequate, but not by much.  The real improvement though, was the return of Mama Rita’s salsas.  Fresh pico is great and all, but a real salsa, like a good cup of tea, has to be allowed to steep and stew in its own juices a little.

So just to sum things up, this trip to Mama Rita’s was far better than the first.  I don’t think I can adequately judge the service for families or large groups, other than to say if you’re in a hurry, don’t go.  The wait staff, while friendly, seems to exhibit little to no sense of urgency in getting you served quickly.

I can, however, say that the food has seen great improvement overall and I heartily recommend that you give it another shot if you’ve been previously jilted.  Anything with the blackened shrimp is going to be a winner.  Sure it’s a little expensive.  But it’s the only game in town for Dos Vientos, so what do you expect?  My meal, which was a ton of food, plus chips and salsa and my lonely dos equis came out to $23 (before the tip), which I think was pretty fair, all things considered.

If they would have tried to give me three shrimp though, we’d be talking about how I punched the cook in the neck, instead of how impressed I am with the strides they’ve made in such a short time.

So there it is.  It’s safe to go back to Mama Rita’s.  I swear, you can even drink the water!