As most of you know, I had an absolutely horrendous BBQ experience a short while back at CJ’s in Oxnard.  Honestly, it had more to do with the service than the quality of the food.  But still, who wants to give their hard earned cash to a bunch of jerks, right?  Right.

Well another Ventura county BBQ-er managed to get wind of that post and comment on the site.  Here’s a slightly edited version of what he wrote:

I checked out your review of CJ’s BBQ and I think that you are a guy that tells the truth…  I want you to check out JD’s Louisiana BBQ and let me know what you think…. I will guarantee you that you will be treated well and fed the best BBQ in this town!!!! You don’t even have to tell me when you come… All I want is a honest and fair review…  JD’S LOUISIANA BBQ CO.

Now, since I love BBQ and also the crushing of my enemies, I thought, what better way to get even with CJ’s than to review every barbeque restaurant in the area?  Thus Ventura BBQ Wars was born.  Of course, Mikey and I are sworn to remain fair, impartial and dedicated to bringing you the god’s honest BBQ truth.  Here we go…

JD’s Louisiana BBQ – On the corner of Patterson Rd. and Wooley Rd. in Oxnard 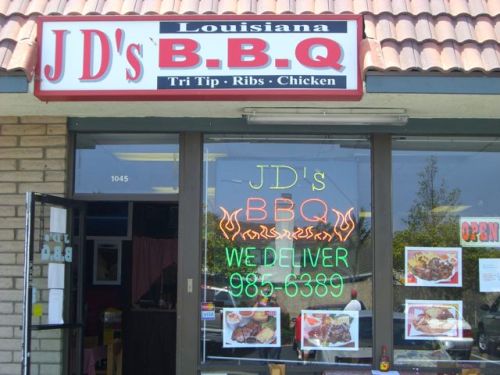 I’m just gonna come out and say it.  The only thing CJ’s has on JD’s is a larger selection.  But I think there’s something to be said for doing less and doing it better.  I mean seriously, since I got my iPhone, I’ve learned that I can twitter (@EatMeCalifornia), check the Dodgers score, adopt a Rwandan orphan and buy Mikey’s fossilized chest hair on Ebay, all from the comfort of my local starbucks.  It’s almost too much to bear.  Sometimes, simple is better.

Other than that, everything about JD’s was better than CJ’s.  Especially the service.  Mikey and I took Mr. T along for this adventure and I must say that he is becoming quite the little foodie.  We walked in and were instantly greeted by a friendly face.  When he found out that we had never been there before, he was quick with suggestions and all kinds of help.  We ended up ordering their “Family Pack” which has:

Yeah, you saw that right.  Six kinds of BBQ on one plate.  It was definitely a meal fit for us three manly men.  We grabbed a seat in their little dining room and waited for the BBQ goodness to rain down on us.  When the food did arrive, it was all slathered in their homemade barbeque sauce.  Here’s a picture of the madness.

It probably doesn’t look very appetizing, but don’t let my bad photography fool you.  This was good stuff.  The barbeque sauce was the key ingredient that tied everything together.  It was smoky, sweet, but not too sweet and was not runny at all.  In fact, I’m glad they gave us a whole stack of napkins because no matter how hard I tried, the stuff got everywhere and on everything.

My favorite meat on the plate was the beef rib.  It was very tender and there was a lot of meat on the bone.  My second favorite was probably the baby back rib because it was also delicious.  It wasn’t a “fall of the bone” rib, but they managed to get a really nice texture just the same.

The tri tip and hot links were average to above average in my book.  The links were not quite as spicy as I’m accustomed to, which was a minor disappointment.  I might have liked it more if they had a spicy version of their barbeque sauce to go with them.  The tri tip was serviceable.  It wasn’t dry or overcooked, but there was quite a bit of fat on the pieces that I ate.  Hopefully Mikey will insert his comments, because I remember him really liking the tri tip at JD’s.

The last two meats were the ones I had the biggest problem with.  The pulled pork was decent, but it was cooked in such a way that it kind of crumbled into nothing.  The flavor was good, but I prefer my pulled pork a little more string-like. and I also like it on the spicy side.  The chicken, however, was not a favorite of either Mike or myself.  It was undercooked.  Not to the point that I felt unsafe, just a bit uncomfortable.  Given the amount of meat that we had, I think one undercooked item is acceptable.  I just wish it hadn’t been the chicken.

The chili beans were utterly fantastic.  They were cooked with big chunks of ground beef and these amazing stewed tomatos that just oozed flavor when you ate them.  I know it sounds weird, but I think that they might have been my favorite part of the meal.  On the other hand, the fries did not make a great impression.  They were actually a little soft, when they needed to be the crispy compliment to our meat medley.  They did give us a nice basket of garlic bread though, which did a great job of sopping up all the sauce as well as the stew from the chili beans.

The “Family Pack” was $45.  With tax, tip and three cokes, we were out the door at just under $60.  They say there’s enough food to feed five.  I think that may be stretching it a bit, but 4 would certainly not be a problem.  These guys definitely know their ‘que and on top of that, they make you feel like a part of the family.  It’s the kind of place where everybody knows everybody else and there are no strangers.  Also, they do a country breakfast on the weekend which I’m hoping to try.

Regardless of whether I make it back or not, it looks like Charles was right in his comment.  Mikey, T and I were treated very well and, so far at least, this is the best BBQ EatMeCalifornia has had in the Oxnard area.

Mikey:  The tri tip was supercalifragilistic.  It was tender and juicy.  I like my tri tip a bit less on the fire, but that is more of a personal issue.  JD’s sauce is fantastic.  Sweet, tangy, and smokey all at once.  The chili was my favorite part too.  I took it home, re-heated it and dug it even more at one in the morning.  I agree with the B and my boy T, the fries were the weakest part.  However, you slap some of that chili with the stewed tomato’s on those bad boys and you’ll be happier than Brian with his new iPhone at a big word convention where Dennis Quaid gets in a fight with Moby and they fight it out gladiator style over a pit of deadly knife wielding oompa loompas.  Yep it’s that good.

Got ideas on the next Ventura county BBQ battleground?  Let us know in the comments.