The only one in Golden China

Got some requests for more Chinese food so I hit up one of Ventura’s older places, right off of Seaward.  You can see it from the 101 and from what I hear they are more popular for their Karaoke nights then they are for the dining.  I’d actually been there before.  A few years back I hit up the bar with some friends and sang Enter Sandman, but I’d never had the food before.  Off we go to a very large Chinese Restaurant called Golden China. 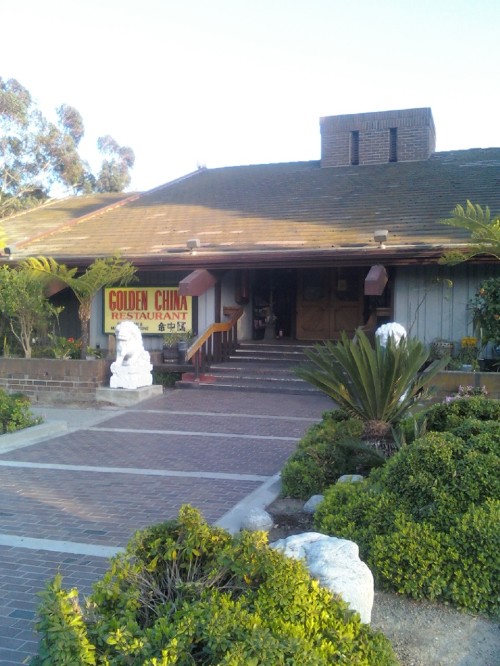 Watch out for ninjas in the bush's

The place is actually pretty nice.  It’s got seating around a fireplace and it has some really big fish tanks which may hold a few of the fish dishes, I’m not really sure.  The fish didn’t move too much and they looked a bit depressed.  Something tells me they’re occasionally a menu item.  They have a huge water fountain in the middle of the place kinda like a Vegas lobby, and a lot of mini trees.  It’s fairly dark, and most of the tables have those little bamboo plants in either grey goose vodka or patron bottles.  Great way to make use of them I guess.

I’m pretty sure the waitress was a ninja.  She had freakish speed and would appear and disappear on every side.  The only thing missing was a puff of smoke.  I’m guessin it would probably set off the fire alarms.  They have a pretty large dining area with a lot of twists and turns and this girl definitely had the crouching tiger, hidden wonton thing going on.

I ordered some hot tea and water and poof, she was gone.  Seconds later, hot tea.  I tried to keep track of her flight pattern but it was never the same route twice.  Looking at their appetizers, one thing caught my eye.  It was something I’d never seen before: shrimp toast.   I asked my ninja what it was and she answered me, I’m just not sure what she said.  I think it was some kind of ninja subterfuge trying to confuse me.  I decided to go for it.  I also went for the mainstays of Chinese dining: the beef and broccoli, sweet and sour pork and chow mein.  I also ordered something I’d never eaten before: pineapple chicken.

The shrimp toast was an odd dish.  They were like little grilled cheese sandwiches with shrimp in them.  The odd thing was it was like the shrimp was almost in the bread, not in-between.  It was ok.  I found it to be a bit over-cooked side and greasy.  There wasn’t too much flavor happening and it’s really hard to taste shrimp with all the bread and cheese.

The beef and broccoli was really good.  Big hunks of beef, lots of garlic in the sauce and the broccoli was very green and fresh.  It was definitely a well prepared dish and one of my favorites on the night.  The beef was not over-cooked.  It was right in the ball park.  Sometimes places can give you more of a beef flavored chewing gum, but not Golden China.

The sweet and sour pork was good.  The sauce was great, but it’s pretty hard to mess up sweet and sour sauce.  I would have liked a bit more vegetable in it and a little better pork too.  The pork they used was a bit gristly.

The chow mein was very greasy.  I’m pretty sure there was enough grease in there to lube up a car engine, fix a rusty door, and give me a great part in my hair.  I like to eat with chopsticks and it definitely increased the challenge by greasing up my lumber. Get your heads out of the gutter, we’re talking Chinese food here.  They need to lay back on the grease.  The noodles and vegetables were good, but it really didn’t need all the lube.

The pineapple chicken was the biggest disappointment. If you have ever been to a Hawaiian BBQ joint, it’s a lot like the Chicken Katsu.  Except here the chicken was dry and the batter flavorless. The chicken sits in the pineapple sauce which is almost as bland as the chicken itself.  No sweet, no tang, no real tropical flavor to it whatsoever.  It was a very bland dish.  It needed a lot more pineapple and I would infuse maybe a little honey and orange into the chicken itself.  It needed juice and it might even be a good idea to let the people cut it, instead of the kitchen, because every slice I had was dry.

It’s a very beautiful restaurant and a great place to eat Chinese with friends and family.  They need to hit the spice rack a bit and get some life back into the chicken.  I’d go back mostly just to watch the ninja bolt around the place.  Like I said earlier, they do have karaoke night and it’s a pretty good set up.  They also have a Sunday brunch, though when I think brunch I don’t usually think of China.  My fortune sucked too.  It had something to do with lookin for rainbows or some nonsense.