Best Breakfast Burrito… In The World

Today I have a special treat for all of you loyal EatMeCalifornia readers.  I made a special trip up the coast to the lovely little town of Santa Barbara, in search of the best breakfast burrito of all time.  I found it at a little place, in Isla Vista, called The Cantina.

Now I have been enjoying Cantina Breakfast burritos for years.  2000-04 to be exact, but I hadn’t had one in a while so I took a pretty big risk by making this trip blind.

Still, like all good things in this world, the Cantina is as it ever was.  Except the fact that it’s cleaner and brighter than the dingy little mexican joint I gorged myself on as an undergrad.

They even have the same sign out front.  Now this place is tiny, but it packs a big punch with the local celebs.  When I was a Jr. (this will date me a bit) Brad Pitt and Jennifer Aniston came in to get burritos while I was there.  Honestly, if any celebrity is going to risk an STD by venturing into I.V. unprotected, it had better be for a damn good reason. 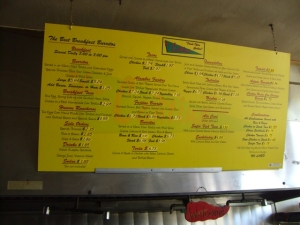 Anyway, Cantina serves up all kinds of mexican food.  In fact, they used to cut off the breakfast burrito at 2pm when I was in school.  Now they serve them all day because they know where the money’s at.
The breakfast burrito doesn’t even have meat, which normally would have been a sticking point for me back in the day.  But let me tell you, it doesn’t even matter.  The potatoes are so rich and creamy and mixed with the cheese, spanish rice and perfectly cooked egg, meat would only ruin what could be considered natures perfect dynamic.

The service here is fast, unless there is a line out the door which pretty much happens every Saturday and Sunday morning.  I lucked out because since this was spring break, my friend and I pretty much had our burritos in under 3 minutes.  The only thing that took less time was me actually eating the thing.
Another awesome thing about Cantina is that everything is out in the open.  People think that this type of thing started with Chipotle and other burrito chains, but people are generally retarded.  Cantina has been doing it, along with Freebirds just up the road, since the beginning of time.  Oh yeah, and their food is better too.

Finally, since it’s march madness season, I would just like to leave you all with a little shoutout to the boys of UCSB’s 01-02 squad.  Thank you for being the only team while I was in school to make the big dance.  Thank you for giving me the opportunity to get obliterated on bacardi limon and cuervo.  And most importantly, thank you for not getting past the first round.  That shit would have killed my bracket.

Go Gauchos! You'll get back there someday.

3 responses to “Best Breakfast Burrito… In The World”