As I start this post, I am at the edge of sleep.  Imagine, if you will, a man at a desk with eyes half closed and slow laborious breathing.  He is leaning backwards in his chair and yet his stomach is in full contact with the aforementioned desk.  Ladies and gentlemen, that man is me.

Tonight I had the privilege of eating at one of Los Angeles’ burger institutions.  It’s housed in a little building on Pico just east of the 405 freeway and across from the Westside Pavillion.  This is the joint that you hear about when people do their best of L.A. lists.  It’s small, it’s hot and you can’t park within a city block of the place.  It turns out all of those things are beneficial though, because without them the lines would be around the block instead of just past the door.  Here at EatMeCalifornia, we like to cut through the hype and tell it like it is.  So without further ado, I give you…

My main reason for wanting to come to this place was because I had heard that they have great burgers.  While that ended up being true, it was the seating arrangements that made for the most interesting part of the night.  That’s because The Apple Pan has one u-shaped counter, no tables, no booths, nothing else.  As you walk in the door, you are instantly greeted by the suspicious eyes of everyone else waiting for a seat.  There is no hostess taking names.  Instead, you simply take note of the people already there and then of anyone who comes in after you.  In theory this seems pretty straightforward, in practice though, it is anything but.

There are two schools of thought when it comes to seating.  The first is simple enough: first come, first served.  The second theory, as explained to me by a patron tonight is this: attempt to figure out which customers are almost done eating, stand behind those customers and then, as they leave, take their seats.  As I waited for the people who arrived before us to be seated, I witnessed several intense battles over the right to claim a place at the counter.  Luckily, I had gotten to know many of the customers and didn’t have too much trouble after waiting my turn (about 45 minutes).  I was told by several customers that this was about as busy as The Apple Pan gets, but considering the peoplewatching and the legitimate prospect of violence, I considered the wait to be pretty manageable.

As I took my seat and let myself sink into the vinyl, I began to really absorb the sights and smells of The Apple Pan.  The meat smell is wonderful and you can actually hear the sizzle of the patties as they cook on the grill.  The house sauce, which is some kind of apple relish and ketchup mix, hangs in the air and gives the place a sweet and tangy aroma.  Needless to say, between the smells, the wait and the hike from the car, I was ready to get my burger on.

I ordered their standard burger (they call it the Steakburger), but because it was my first time to The Apple Pan, I ordered a double.  I also got some fries and an IBC Rootbeer for good measure.  Wow, when my burger came out my jaw almost hit the counter.  The hamburger patties were about 3/4 of an inch thick.  Usually when I order a double at Tommy’s, In-N-Out or someplace like that, it’s just enough food for a guy like me.  This was half a cow on a bun.  Plus, the burger comes with the previously mentioned sauce, which is unique to The Apple Pan and completely makes the burger in my opinion.

My rootbeer came out in an ice cold bottle that reminded me of the days and nights I spent with my dad sipping away, listening to Vin Scully call the dodgers on the radio.  The fries were delicious, and more importantly they allow you to order them regular or well done, which is the kind of old school transparency that I love about this place.  They put it all out there for you to see, in all its simple glory.  With all the food I went through, I almost didn’t have room for dessert, but I just didn’t have the heart to let you guys down.

It was awesome!  I don’t normally go out of my way to order banana cream pie, but this had the perfect mix of bananas and filling which kept it from being too sweet.  Next time I will try to sample the apple pie and report back, but I’m not making any promises.  The banana was that good. 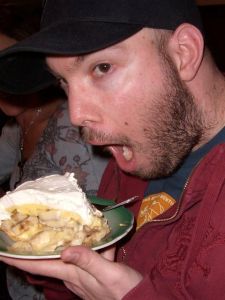 I just want to leave you with a few spare thoughts before I wrap up this post.  First, the service at this place is old school and no-nonsense.  It’s best if you keep the questions to a minimum.  I asked our server, Gordon, how long he had been there and he replied simply, “Too long.” Second, bring cash, the registers are leftovers from the Roosevelt era and these guys are more likely to take your pink slip than a credit card.  Third, remember the people immediately before you and immediately after you. If you manage that, things just kinda take care of themselves.

If you made it this far into my post, congratulations!  It is becoming obvious to me that the blood normally pumping into my brain and propelling my writing is instead working overtime in my stomach.  If that doesn’t tell you how much I enjoyed The Apple Pan, I’m not sure that anything else will.  Okay, maybe this photo:

Thank you and Goodnight!

Special thanks to our neighbors at the counter.  Without you, we wouldn’t have learned the ropes so quickly.

11 responses to “It’s like musical chairs, but with hamburgers!”