Brian fell off the wagon and landed on Chili Cheese Fries

I have to start this post by saying thanks to Mikey.  Your goddamned mini sirloin burger post has me craving all kinds of junk food.  I didn’t even think they looked appetizing, it was that freaking jingle that set me off.  But rather then go full-on into the fast food, I decided to seek out a fast food alternative and one of Thousand Oaks’ hidden gems.

I wasn’t in the mood for a burger since Mikey and I grilled up some great ones on Monday.  I guess that was the start of the problem.  But rather than ignore it, in the vain hope that it will go away, I decided to embrace the craving.

I’ve been wanting to review P & L for a while now.  I used to go there a few years back for their breakfast burrito.  This was back before they expanded the restaurant and before they knew what a credit card was.  I don’t know why, but I hate places that are cash only. (except the Apple Pan)

The breakfast burritos are very good here.  In fact, I would put them in my top 10 hangover foods of all time.  That whole list is definitely something I’ll get on here someday, but sadly, that day is not today.  P & L has made one huge change since back when I was buying the BB.  They now serve it all day.  Gotta love the breakfast burrito for dinner.

As I said before, they’ve also expanded the dining area.  It’s probably three times as big as it was before, when it was basically 6 booths and a counter.  Now it’s actually a place I would want to sit and eat, even if the chairs do remind me of patio furniture.

The final push that I needed to walk in the door was the awesome testimonial I got about their chili fries.  Thanks again to Aaron and Lindsey for the tip.  Now here’s what I thought of your precious little fries… 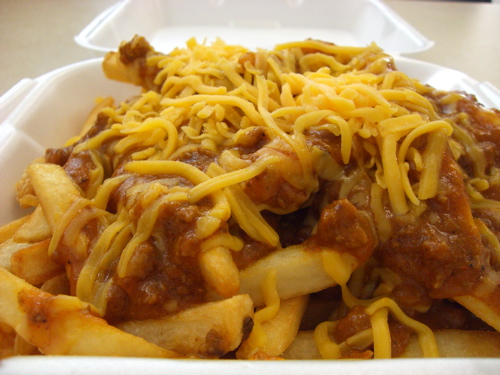 Let’s start with the good news first.  The fries were nice and crispy.  You have to have crispy fries that stand up to the chili, otherwise you get a soggy mess that is practically inedible.  I also really dug the fact that some of the cheese was unmelted when the fries got to me.  I like to be able to taste the difference between the cheese and the chili as opposed to just having it all lumped together.

What I wasn’t really a fan of was the fact that they didn’t give you that much chili.  My general rule is that you have to have at least a little chili on every fry.  The fries in the middle eventually get it as you work your way down, but there is no excuse why the fries on the outside should ever be naked.  The chili was only average, which I probably wouldn’t have noticed if there had been enough.

Still, for five bucks, it’s a pretty good deal.  They give you enough fries for two people to share. But if you’re adventurous, or just plain hungry, you could probably take the whole thing down by yourself.  I just didn’t want to deal with the guilt.

The people who work here are friendly.  They’ve hired a few more people since the expansion and the new talent does a lot to warm the place up.  Back when it was just a tiny place, I would just order, try not to bother anyone, take my food and go.  Now, I think I’ll be going back on the regular.  At least for the breakfast burrito.