This past weekend the boys of EatMeCalifornia took a little road trip.  Well, half a road trip.  See that jeep in the background of our header?  That jeep used to be Mikey’s.  Now it’s in pieces, making it’s way across the US/Mexico border.  But things tend to work out for Mikey and I, and it is for that reason that Uncle Dave came to the rescue and provided Mikey with his new ride… for free.

(Car in photo may be slightly different from Mikey's ride)

So we flew up to San Fran, full of promise and looking for adventure.  Luckily Uncle Dave also has an awesome ladyfriend and it was at her suggestion that we visited Nettie’s Crab Shack, a fairly new addition to the San Francisco food scene.

After dropping our bags at our hotel, Mikey and I hopped in his new whip and headed for the Marina.  We were meeting my friend Beth, who is just as awesome as Mike and I, plus she knew the territory and agreed to serve as our guide for the evening.

We grabbed a table outside, then realized that San Francisco is about 20 degrees cooler than L.A. and quickly moved the party indoors.  We started out with a round of drinks and I quickly discovered Nettie’s dark little secret.  They want to get you hammered.  Mikey got a drink called the “Deadliest Catch”, which was a rum and orange concoction.  I’m not sure, but I’m fairly certain that Sig Hansen of the Northwestern would personally bitch-slap any member of his crew who got caught drinking one of these.  My drink wasn’t much better.  It was called a “Man up” which I took to be an indication of manliness.  It was a lemon martini made with gin.  Clearly, what the title meant was that you needed to be really secure with your sexuality to order it.  I don’t remember what Beth’s drink was called, but it was the booziest of them all.  It was pretty much just bourbon with a splash of something for color.  Whatever it was, it could put hair on your chest.

Since we were going all out, we decided on two appetizers.  We ordered the Crab & Artichoke Gratin and the Steamers, which were little-neck clams that came in a good sized pail.  The clams were my favorite of the two dishes, mainly because we couldn’t find any crab in the gratin.  Our gratin was essentially what you can get in many other restaurants as Artichoke dip.  In San Francisco, everything has a fancy name. (except pail, but they give it an accent mark to not hurt its feelings)  There were literally two chunks of crab in the dip and when Beth found the first one, it set off an all-out crab fishing expedition between Mikey and I to find the remaining crab.  The clams were done simply and tasted great.  They basically steamed them just to the point of opening and added some sliced onion and celery.  We made short work of them. 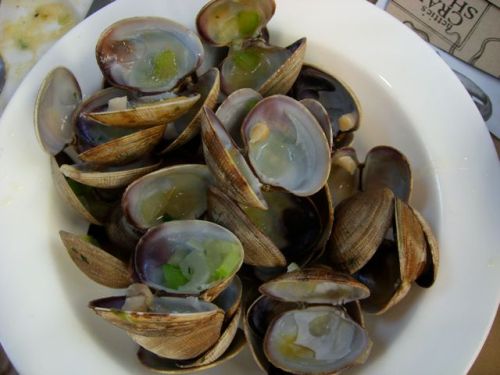 It was at this point in the evening that our drinks began to kick in, so we placed a moratorium on photography for the rest of the evening.  Actually, that’s not true, we were just having such a good time that I forgot to take pictures.

For our main courses, we had the halibut, the fish and chips and their burger.  We were in a sharing mood and wanted to get a good idea of their land offerings as well as the seafood.  The halibut was baked in a fig leaf and had a nice cream-based sauce.  It was one of the specials for that day and as far as halibut goes, it was cooked well and came in a large portion.

The fish and chips were good too.  The batter was light and crisp and the pieces were huge.  Their chips were wedge cut potatoes that were seasoned with salt and a little black pepper.  The only complaint I had about the fish was that the batter got a little mushy after a while.  I’m sure it’s just because we were taking our time, but just the same, be forewarned.

The food fell off a bit with the burger, but what was I expecting at a seafood restaurant.  I ordered it medium, but it came out pretty well.  Plus the taste of the meat reminded me of a kosher hamburger I got at the museum of tolerance on our 5th grade field trip.  The meat tasted suspiciously similar to a meatloaf disguised as a hamburger.  It was actually the only part of the meal that we didn’t finish.

The bottom line is that Nettie’s is an awesome spot to meet for drinks.  The food is good, but I’m fairly certain there is better seafood in San Francisco.  The vibe is great and the service is friendly and that alone makes it worth a visit.  But if I do go back, I think I’ll stick to their specials, which are nicely done, and I’ll definitely avoid the burger.

Following our meal, Beth took us out to a couple places that are definitely worth checking out.  They are both in the Mission District and have great drinks and even better people.  Both of these spots are on Valencia and they’re within a block of each other, so you can start at one and stumble over to the other.

The Phoenix is a pub.  It’s loud, the music is cool and the beer is flowing.  They have my favorite Irish beer, Smithwicks, which is an ale that is a little bit sweet, but not too sweet.  They have other beers too and I saw a full bar, but at a pub the drink of choice is beer.  This is not the place for club kids and hollywood types.

Elbo Room can best be described as a lounge.  It has lots of booths and not a lot of light.  They have a big screen that cycles film noir and a bar that has about 15 California microbrews on tap.  I was sticking to beer at this point but Mikey swears that they only put enough coke in the jack & cokes to bring them to a light shade of tan.  The place was absolutely packed, but unlike clubs in L.A., you could actually get around.  Maybe it’s because the people in San Francisco are not as self absorbed as the folks I’m used to dealing with at bars.  Regardless, this is definitely the place to go, especially if you dig that 30s speakeasy vibe.

If you are in San Francisco and looking to party, we highly recommend you stop by either The Phoenix, the Elbo Room, or both.  Since I’m pretty much taking the rest of my life off from drinking, I won’t be able to join you.  But go anyway, you’re guaranteed to have a great time. 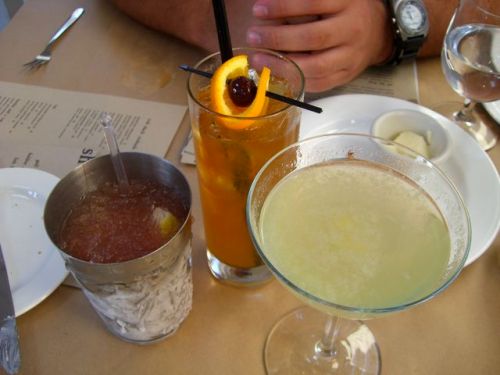 5 responses to “Nettie’s Crab Shack, The Phoenix, Elbo Room and No More Drinking”