Beware.  There be spoilers ahead!

We have finally reached the end for Season 5 of Hell’s Kitchen and I gotta say, it’s about time.  This has been a rough season to watch, mostly because of the lack of talent and the abundance of the mentally challenged.  Let’s kick it off with a recap of last week.

I’ve learned my lesson with Hells Kitchen and didn’t bother posting a Hell’s Kitchen article last week.  Knowing ahead of time that they always do the most to stretch it out, I thought it would be a wasted article and as usual (except for the time I jumped that rod iron fence in baggy shorts) I was right.

In the first part of the season finale Danny and Paula begin to design their restaurants.  Paula is going for more of a bistro, while Danny seems to be leaning towards Danny’s fish and beer. 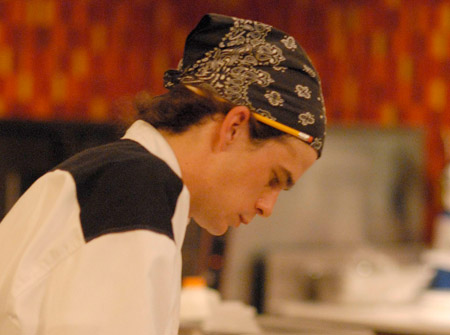 The difference in these two chefs is actually quite a bit.  You can see it immediately with their restaurant ideas.  Paula is going for bright and modern, using the sun and Brazil as inspiration.  Danny wants to put up mounted fish and squared off benches, using seafood and gun racks as his inspiration.  It was great seeing the designer’s face when he was asked if he could get a marlin up on the wall.  I’m sure he was hoping he was going to get a chance to design the Seafood Shanty.  I’m not against places like that and I love to eat in them.  This is, of course, the Borgata in Atlantic City and they can’t afford to invest in Danny’s Lobster and Suds.

The two chefs fly to the Borgata, while a couple of their family members keep up the work on their restaurants.  At the Borgata, Danny and Paula face off, with Danny just barely edging Paula to win the challenge.

Back at Hell’s Kitchen we find out, as a reward for the victory, Danny gets first pick for his Brigade out of a pool of the last set of contestants.  He chooses Ben, who is the best choice out of the group.  Ben can handle the cooking and will work hard for Danny.  Paula picks Andrea which is a horrible pick.  She’s awful under pressure and is not a strong chef.  Danny then picks Giovanni, which is another great pick.  Danny now knows that meat is covered.  Paula picks LA, who should have been her first pick.  LA is the best line cook.  She’s no head chef, but she’s a great one to have on the line.  Danny picks Carol, ’cause he doesn’t want Lacey and we all know Paula was thinking she’d rather pick the chair in the corner.  Instead, she’s stuck with Lacey.

Andrea on meat! LA on garnish! Lacey run into a wall as hard as you can!

The restaurants are completed without a snag and chef Ramsey goes through the menus for both teams, giving his opinions.  Danny’s menu has lobster, seared ahi, a duck salad, filet, monkfish, chicken and cinnamon poached pears for dessert.  Danny, who named his restaurant “The Velvet Hammer,” which to me sounds like a drink, or a porn star, was able to mount some fish on the walls.  They ended up lighting them like they are in water, making it kind of look like the play room at an aquarium.  You can kinda tell Gordon is taken back a bit by it.

Paula’s menu has her own homemade eggplant pasta, a scallop salad, halibut, chicken, and a banana crème brulee.  Paula’s restaurant, “Sunergy,” comes out very bright and modern and looks more like a fine dining restaurant. Gordon likes the feel of her color choices and likes the design.

The trouble begins in prep where Lacey ruins the crème brulee and Andrea overcooks the halibut.  The only issues in Danny’s kitchen are the “I don’t care” and “just wanna go home” attitude of  Gio, and the “girl power” of Carol. Personally, I was leaning more towards Danny and his team, mostly because he just had the stronger team and would have to do less work.

Dinner service begins and Danny immediately begins yelling out orders and getting his team moving.  Paula takes much longer to get going and takes a more quiet approach.  We all know quiet does not work for Chef Ramsey.  Paula needs to get on this team because she only has one reliable line cook, as she soon finds out.

Danny’s pushing out appetizers and only gets stuck because Carol is punishing the Lobster for its sins.  Meanwhile, over in Paula’s kitchen, Andrea burns scallops while Lacey aids and abets by trying to hide it.  They get caught and Gordon gives them an earful.

Entrées come along and while Ben makes marathon potatoes and Gio over salts monkfish sauce, Andrea can’t figure out how to cook halibut and Lacey is confused by shiny things and appetizers.

As the dust clears, Danny’s kitchen gets his orders out first, which was a clear sign of his leadership, his ability to know his team, and his simple delicious recipes.  Paula was too quiet, didn’t want to confront her team, and her menu was too complex for the talent she had.  She had the chance to pick Gio or LA first and she should have.  Her team made it harder for her to win.  As far as food is concerned, I think Paula may have had the edge, but when it comes to the whole package, to me Danny was the clear winner.

Fox, of course, gives us 10 minutes worth of commercials before we find out who the winner is and then it comes down to the 2 doors.  The winner’s door obviously opens, while the loser’s door remains locked.  I think they should put them in a long hallway and have them run to their doors chased by angry rabid cheetahs.  The winner gets the money and the Borgata job, while the loser becomes a meal in Hell’s Kitchen.

Unfortunately they just go with the normal door locked or unlocked thing and we all watch as Danny emerges from his door.  I had to wonder if the Borgata guys wanted Paula instead, just to make sure their place does not become Danny’s Got Crabs.

It was a rough season, and Paula will definitely get a job wherever she wants.  I’m hoping next season they find a new talent pool because this one was really bad.  Danny is a good chef, no doubt, but even watching him this last evening I could not picture this guy as a head chef in a fine dining restaurant. Summer is coming folks, so the show reviews are coming to an end.  To make up for that, we have some great stuff coming, so keep on checking in.