I have had a lot of fish tacos in my time.  The taco I had at Spencer Makenzie’s made all those other tacos seem like nasty ass tuna tacos from a frozen multipack at your local grocery store.  This taco made me feel like I was in Hawaii drinking one of those umbrella drinks, lying in a hammock, while the Hawaiian Tropic girls fanned me with 100 dollar bills. It was that good. 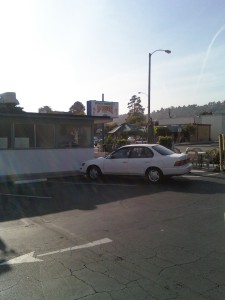 This place is not much to look at from the outside.  It definitely does not look like it houses great food.  Inside it’s more like a little diner or an indoor taco stand.  They have a great bunch of people working there.  People who actually know the products and can give you some great inside info on their food.

I ordered the ahi taco, a grilled shrimp taco, the shrimp and chips, and the wontons.

Their prices are a little on the high side, but you’re paying for the quality, so it kind of works itself out.  The ahi taco, for example, is one of their most expensive tacos, but it’s definitely worth it.  You get a great serving of Ahi that’s seared and served inside a tortilla with cabbage, cilantro, and bell pepper.  They have a fire sauce, which has a nice kick and their own Spencer sauce, which also has great flavor.  It’s kind of like Snapper Jack’s sauce, but it’s a bit thicker.  I was sworn to secrecy on the ingredients.  The ahi is top notch and fresh.  It’s seared perfectly and is absolutely wonderful.

The shrimp are huge and clearly they are very generous with it.  They have this great parmesan hard shell that adds some great zest to the taco.  The cabbage is fresh and the Spencer sauce works really well with the shrimp taco.

The shrimp and chips were really, really good.  They are breaded beautifully and fried to a crisp, golden brown.  The fries are not too greasy and actually taste very good in the Spencer sauce too.

The wontons were just a tad greasy, but the cream cheese and the big chunks of shrimp inside made up for that.  In addition, they give you this awesome sweet and sour dipping sauce.  It is very sweet, but also has a great chili zing to it.

This is one of the first places where I was digging everything I was eating. They have a really good handle on fish and shrimp. They use high quality, fresh product and it shows.

The best part is that Spencer Makenzie’s is family owned.  The restaurant is named after the owner’s children.  It’s a very relaxed and fun place, not too far from the beach and downtown Ventura.  If you were, say, driving to Santa Barbara to get all drunk and cause problems for the local police, this would be a great place to stop.  You have to keep your eye out for it because it blends in with the surroundings like some kind of great fish taco chameleon.  But if you’re in downtown Ventura, or heading to the beach, you have to hit this place up.  Great food and really great people!

If I was not forced by Brian to try other fish places, I would only go here from now on.  Unfortunately he has a few pictures of me and Gina Carano playing naked mma fighters, and if they were to get out I’d have women from everywhere trying to get with me.  I just don’t have that kind of time.  Someone has to eat this stuff for you people.