So, basically, I don’t hate Chinese food.  Chinese food hates me.  Or rather, anyone who owns a Chinese food restaurant hates me.  Maybe it’s because I haven’t been to a really good Chinese restaurant, but I keep trying places and getting disappointed.  So this post is dedicated to the top three reasons why Chinese food is about to get bounced off my list of food options.

For the purpose of this post, I’m not referring to chain restaurants like Panda Express.  I actually think the food there is decent.  The only problem with Panda is that I feel like I’m always drawing the short straw when I go there.  I mean, some people always stand in the slowest lane at the grocery store, some people never get the front parking space, but me?  I get the guy at Panda who has to prove how good he is at keeping costs under control.

You know this guy.  He’s the one who gives you the half scoop of beef with broccoli and can eek out 975 servings in a single tray of orange chicken.  I don’t go to Panda anymore.  Not ’cause I don’t enjoy the food, but instead because I don’t want a plate full of rice, garnished with two pieces of orange chicken and a sprig of broccoli.  Actually, since I won’t go there anymore, I’m asking one of you, any of you, to punch that guy in the face next time he gives you that vacant stare when you ask for just a little more kung pao chicken.  Right in the face.   And tell him Brian sent ya.

Okay, so now that I got that off my chest, I think it’s safe to move on to bigger and better things.  The first of my three main gripes with Chinese food restaurants is this:  I feel like I’m eating in someones house, but they don’t want me there. 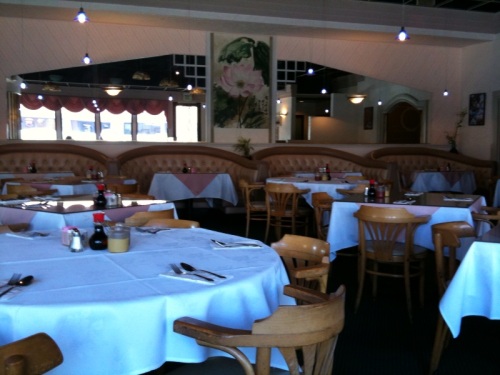 Now, a lot of this has to do with the decor.  I’m not super comfortable with decor that is 95% covered in gold leaf.  It just seems a little formal to me.  I feel like I’m sitting in a china cabinet, no pun intended, and if I move the wrong way I’m going to knock over Aunt Edna’s collection of antique pewter goblets.  I know it’s kinda irrational, but I think I feel this way because of the way the staff tends to look at you.  I don’t like the feeling of having someone look over my shoulder, but when you throw in a constant air of disapproval, I’m instantly on edge.

The second issue that I have with Chinese restaurants is the service.  I only know four or five Chinese food dishes and the only reason I know those is because I asked friends what to order.  Why is it that the staff in Chinese food places tries to get away with speaking to you as little as possible?  All I want to know is the difference between freakin’ hot and sour and egg drop soup.  Is it that hard?  I instead just sigh and order the hot and sour. 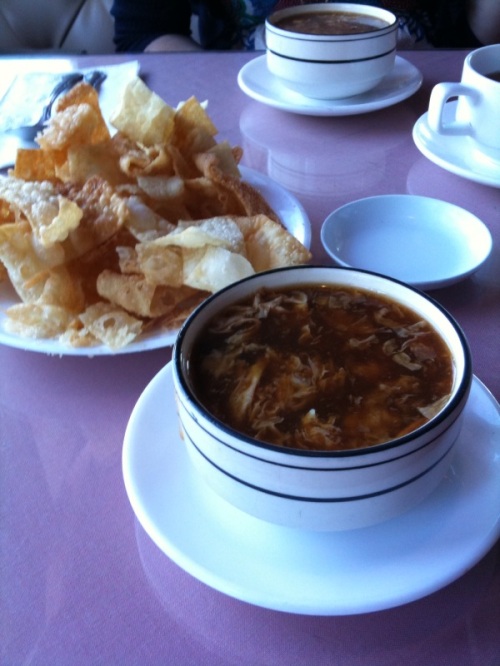 That soup was, by far, the best part of my meal.  It was hearty, it was tasty and those fried wonton thingys are amazing.  I would probably just order that by itself if I could figure out how to navigate the menu a little better.  Also, I kinda think that they would consider me a cheap bastard if I just got the soup, but maybe it’s just me.

The other thing about the service that gets me is the fact that the dishes all come out right on top of each other.  I was about a quarter of the way through my soup when my main course was wordlessly dropped on the table.  By the time I got to my kung pao beef, it was already getting cold.  Do I eat too slowly?  Has anyone else had this issue?

Even lukewarm, the beef was pretty good.  Not as spicy as I like it, but it had enough flavor and the sauce was sticky, sweet and tangy.  The rice was decent.  It didn’t have enough vegetable or egg, but it was cooked properly.  The salad was really unappealing to look at and had the texture of coleslaw, so I passed it over without another thought.

I was starving, so I ate all the beef and quite a bit of the rice.  I got up from the table feeling satiated, if not satisfied.  That leads me to my last complaint.  Why is it that after eating Chinese food, I’m hungry again two hours later?  What about this food gives it the ninja stealth to convince my stomach that it’s not there?  That must be why they only charge eight bucks for the lunch special.  They know you’ll be back in a couple hours, ready to do it all over again.

So there it is.  I feel cheated by Chinese food, and by extension, life.  Every time I go into a new Chinese restaurant, thinking it will be different, I leave with the same sadness and disappointment.  I don’t know who said it, but isn’t the definition of insanity doing the same thing over again and expecting a different result?  So I’m done.  Unless someone out there can tell me of a place that doesn’t fit all of these criteria, it gives me no joy to tell you that Brian will never again enjoy the delicacies of Chinese cuisine.  There are some wounds that just can’t be healed.