With a great name like that, I don’t need to even try to spice it up. Snapper Jack’s was created by a local Ventura man and his wife and yep, his name is even Jack. It opened back in 2000 and I’ve been there a few times. They even have a new location in Camarillo. The one thing I had never had though, was any of their snapper. So here we go with Snapper Jacks Taco Shack.

Snapper Jack’s – Telegraph next to Ventura College in Ventura 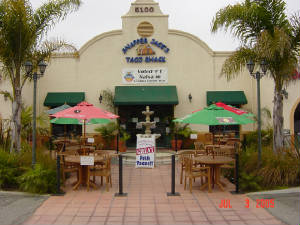 Snapper Jack’s is fashioned after the Baja Fresh/Rubio’s of the world but it’s much more fun. They add more surf type stuff, it’s brighter and much less industrial then the others. The guys taking orders and cooking are more laid back and it very much has a family-owned kind of appeal.

On the front door they have a banner that states “Voted best Salsa in Ventura County.” Because I didn’t get a ballot, I had to have my own election. I ordered a Snapper taco, a potato taco just ’cause it sounded interesting, and a chicken burrito.

The tacos come with cabbage and Jack’s special sauce. You can get them battered or grilled and I usually get them grilled. Not too much fish comes out when it’s battered. I also got a collection of their salsas. They have a good variety, different ranges of spice and different types of flavors. I, of course, got their main sauce which is cream based and mild and is one of their claims to fame.

The potato taco was good. The potato was not quite mashed, which is good. Otherwise you’d have to call it a mashed potato taco. It was a bit sloppy with all the sauce and got kinda messy. They ask you if you want your taco shell crispy and I’m not sure it matters. They throw so much sauce on there that it’s a soft taco when you open it anyway. As potato tacos go, it was good. I’m still trying to guess what the special sauce is. I know it has a cream base, maybe some pepper and mild chili, but the rest I’m not too sure of. I have it back at the lab for further exploration. It definitely is very good though and it goes with everything. Their Aztec salsa was good too. If you go, make sure to get a good bunch of all of the salsas to try.

The chicken burrito was really big. It was stuffed full of chicken and refried beans, which were smooth and tasty. The chicken is good quality, white meat chicken and the tortilla tastes fresh. They definitely have a good handle on burritos.

My only complaints were the Snapper taco, which I thought would be the best of the three, being that it’s in their name, and also the chips weren’t great.

The snapper taco was very sloppy. It had way too much sauce and the fish was a bit greasy for a grilled job. It was also just a bit too fishy calling the age of the fish into question. Cut the grease off the fish a notch and lessen the sauce by half and it would have improved a lot. I’ve had worse fish tacos, but if it’s got your name on it, it should be one of the better things to eat.

The chips were a bit aged and on their way to stale. They need to freshen them up a bit ’cause it was harder to try the salsas with stale chips. I have way more salsa to try before I can call them the best in Ventura County, but they definitely have a great handle on salsa. You heat seekers might be a bit disappointed though. I’d say their hottest registers at maybe a 6 out of 10. The flavors, however, are great. Including some great avocado, garlic, and tomato based salsas.

I’d definitely keep Jacks on the regular visit list. The atmosphere and the great burrito make for a good after-work spot. Give them a try and get the battered snapper. Let me know if it’s any less greasy.