Raise your glass to the Katmai! Deadliest Catch

B-hizzle wasn’t able to catch the last episode of deadliest catch because he had a meeting with the President in regard to making the word “Hella” the official word of California.  Lucky for you guys, being the constant couch potato and armchair crab fisherman I did catch it.

The 3rd episode, one of the most sobering of the shows correctly phrased, “Stay focused or die”, really kind of brought down the mood of the usually cheerfull show. This truly is the worlds most dangerous job.

I think if I were to ever be in the fish and game industry I’d be with those little midget dudes riding the range and pushing mini cows towards becoming mini sirloin burgers.  There was also a commercial a couple years ago with the cowboys herding cats, I’m pretty sure I could handle that too.

I love to fish and I’ve gone deep sea fishing many times.  It’s a great way to catch your own dinner, give yourself a sense of pride and make you feel all manly.  These guys of course take it to the extreme.

Stay focused or die takes us to the attempted rescue of the fishing ship Katmai.  11 fisherman caught in a storm and fighting for survival in freezing cold temperatures and even colder waters.  We all watch as the coast guard struggles to find each and everyone of them, but are only able to save four.

They recount the story of their engineer who perished in the ship trying to save it.  Their shipmate Cedric, who unzipped his own survival suit in order to secure a canopy, was also lost to the Bering sea.  Ten men entered the life rafts.  All night they were tossed out of the rafts and struggled to get back in. When the coast guard finally got to them, just the four were left.

I skipped the whole eat king crab thing or eat at a fish place to just simply raise my glass to these guys.  I definitely respect and admire them.  Here’s to you boys! 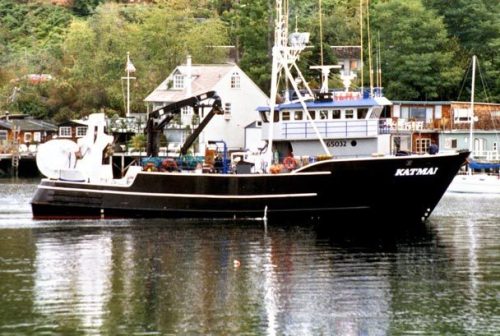 The rescue and tragedy spread to the rest of our captains who reflect and are saddened, of course, by the event.  These guys are all connected so it has to be hard every year not knowing which ships will return to Dutch Harbor, or even if your ship will.  I’m pretty sure there is not a job on this earth I’d do on a regular basis if it meant my life.  Maybe Jennifer Anistons body guard but I’d more than likely push John Mayer in front of the bullet.  “Quick, Jennifer, over here.  I will protect you.  No I don’t know where John is, but now is not the time for grief, now is the time for love.”  Cue porn music.

The Northwestern seems to be the only ship on the crab right now as they took the lead in the total crab count.  The rest of the ships had low numbers and were fetching gear and starting new strings.

Your Captain, B-hizzle, will be back on the crab next week.  In the mean time I shall leave you with some King Crab facts:

Every year, approximately 250 boats head to Alaska with hopes of catching the king crab (and coming home alive).

King crab are prime targets for Alaskan fishermen, who use giant steel cages, usually baited with herring, to reel the critters in.

Not all crabs are created equal; the male crabs (those measuring over 6.5 inches at least) are the only ones the fishermen keep from their catch.  Crab women and children are booted back to sea.

When these crabs spot the bait that fishermen leave out to entice them into the traps they get really excited, and aggressive.  In fact, many crabs are often seriously injured in the tussle, and some are even eaten alive by their peers.

Once caught, fishermen have to be careful with the live crabs; bringing home dead crabs doesn’t sell.

And that ends your king crab cram session.  See ya next week for more deadliest catch and more great seafood.