Jackin’ the Rabbit and Gettin’ Stuft

Saturday was a great day for EatMeCalifornia.  Not only did we get in yet another sweet pizza review, but we also made our first appearance on WordsCause, a blogtalk radio show hosted by one of our readers.  If you haven’t heard the show yet, here is the link to listen.  We pretty much take up the 8-30 minute section of the show, which proves once and for all that Mikey and I are really full of hot air.

Dean actually took the time to come hang out with us and help us eat our pie.  I’ve known him for a while now, but had no idea how talented he really was until he showed me the iphone game that he developed.  It’s called Jack The Rabbit and besides being fun, it’ll also give you gynormous forearms and put hair on your chest.  Oh, you’d like some video?  Here ya go:

I Jacked the Rabbit.

on to the review…

I’m glad that Mikey suggested this place, because it was a good spot to watch the NFL Draft.  They literally had 8 billion TVs, and I was shocked that they didn’t have them in the restroom too.  The place had high ceilings which at first was pretty cool, until we realized that the A/C unit was a holdover from the 60s.  Mikey and I had to keep a full beer on hand just to keep our core temperatures out of the danger zone.  (Yes, you should have just flashed back to Top Gun.)

Some of the 8 billion TVs

Lucky for us, they have about 18 beers on tap and they’re all good.  They even have some house brews, which are always a personal favorite of mine.  Mike and I got the six beer sampler set, which included a blonde, a pale ale, an IPA, a red, an unfiltered wheat and a specially brewed Firestone pale ale.  All of these were decent, but I favored the pale and IPA while Mikey liked the blonde (figures…).  Anyway, I took this artistic photograph that I really wanted to work into the post, so here goes:

As far as the pizza is concerned, Mikey and I were pretty much on the same page.  It was good, but had some serious flaws.  We ordered our pie with pepperoni, sausage, mushrooms, with our wildcard topping being bacon.  The bacon was our first big mistake, because rather than big chunks of bacon, we got what appeared to be the bottom scraped out of the bacon bits at the salad bar.  Mikey said that “Bacos are good for dogs, bad for people.”  The other topping that was lackluster was the mushroom.  It’s not that it tasted bad, it was more the fact that we could barely find it on the pizza.  The pepperoni was okay and the Italian sausage was awesome.  It was in huge chunks and literally made the pizza worth eating.

As you can see from my picture, I’m pretty sure that you could have spotted the sausage from space.  The cheese was decent, but again, there wasn’t too much of it on the pizza.  The same can be said for the sauce.  Mikey and I are really sick of this no-sauce trend in pizza.  It’s beginning to get ridiculous.  The taste of the sauce was good, with Mikey complimenting the kick and me diggin’ on the sweet/savory aspect.  Aside from the sausage, the other saving grace about this pizza was the dough.  Mikey made a point of complimenting the rise that the crust had.  I agree.  It was perfectly cooked and was like getting a breadstick on the end of your pizza.

The one thing that I will say is that the service that we got here was better than anywhere else we’ve reviewed for pizza.  It wasn’t even close.  Either the people who work at Stuft really like their jobs, or they fake it so well that I couldn’t tell the difference.  Regardless, the service alone would make me go back.  The pizza could use some work.  I think if we requested extra sauce and cheese it would have been a whole different story, but it’s not really our job to do that.  We just try to objectively review the pie they set down in front of us.  Still, the overall grade does get a significant bump due to the fact that they treated us like kings.

Here are the Scores:

This really goes to show that pizza quality is the most important thing.  It’s too bad, considering that we really like this place.  But hopefully, next time around they’ll take our advice to heart and give us just a little bit more of what we need.

I want to leave you guys with a happy ending (no, not that kind of happy ending) so I’ve decided to close the post with EatMeCalifornia’s first star sighting.  Thank you, Gary Sinise.  We salute you, Lt. Dan! 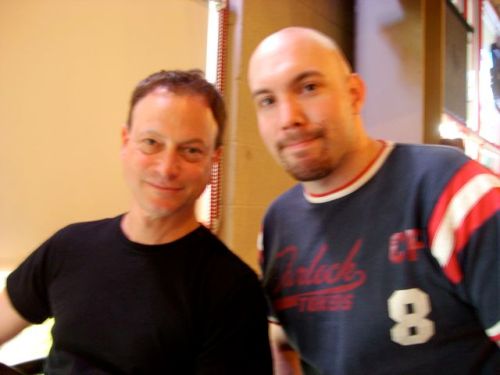 4 responses to “Jackin’ the Rabbit and Gettin’ Stuft”