Peking in on Chinese Cuisine

Yeah, I know the title is clever.  You don’t have to tell me.

I hit up some Chinese food the other day and was in the mood to try some new dishes.  My girls had just finished a heck of a soccer game and one of the parents heard me talking about Chinese food.  They recommended the Peking Restaurant in Ventura.

First off, I think I counted eight “No Msg” signs.  Apparently MSG is not welcome here.  I definitely contain MSG, but I didn’t tell them. I just thought I’d see if they could detect it. 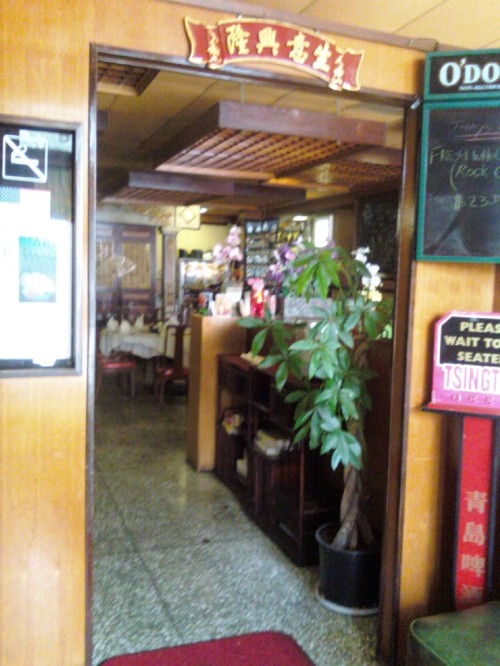 I got the tea to be all sophisticated and decided to try the crab meat rangoons.  I ordered orange beef ’cause it had the international sign for spicy, with the little chili pepper next to it.  I also ordered the almond chicken as my normal everyday dish and tried out their pan fried noodles with bbq pork.

The funny part is that the waitress tried to talk me out of the pan fried noodles.  The problem was I had no idea why she was trying to get me to change my order.  She kept saying it’s “haad noodle wit ravy” over and over again.  I popped in a mento and thought for a second, finally realizing that she was saying that the noodles were going to be hard and that the dish has gravy that goes with it.  Maybe they have issues with people ordering this and hating it, or maybe MSG has snuck in and infiltrated the pan fried noodles.  I finally was able to explain to her that I know what it is, and can I try yours since it’s on the menu and everything?

My waitress took off to do her thing and brought me back 8 crab Rangoon.  I don’t normally get Rangoon because it’s just basically deep fried cream cheese but this was crab meat ragoon so I figured it would spice it up a bit. What I didn’t know is that it was a lot like trying to find Waldo.  I could barely find any crab.  Plenty of cream cheese, and it was fired up fine, but I wanted crab.  It would have been easier trying to find a show on Oxygen that I like.

The almond chicken came next and was fine.  Nothing too exciting, but it’s not an exciting dish.  There are only a couple things to check with almond chicken: chicken and almonds.  Both were plentiful and the chicken was cooked well, with good chunks of meat.  They also had really large chunks of celery in it.  Somebody back there either doesn’t have a knife, or really likes big celery.

The pan fried noodle and bbq pork came next.  For anyone who doesn’t know what it is, it’s basically cooked noodles (kind of like ramen) and then they add the sauce, which in this instance contained full stocks of baby bok choy and slices of bbq pork.  The sauce had a good flavor, it wasn’t over-powering and was tasty.  A nice touch of garlic gave the bok choy a great flavor too. My issue was mainly this: why are there full stalks of baby bok choy in it?  You can break it down a little.  The cook must have something against chopping vegetables.  Has PETA changed its angle, and is now protecting vegetables?  Am I going to read somewhere the average celery is only on its feet for 10 minutes before it is butchered?  That was my only issue with the dish.  The bbq pork was good.  It went well with the sauce and noodles.

My favorite, by far, was the orange beef.  These guys have it down pretty good.  Great chunks of quality beef and the spice was perfect.  It made my eyes water just a bit, without being too much.  It had a really great flavor coming from the chilis and the perfect combination of sweet and spice.  If you hit this place up, I’d recommend the orange beef, but tell you to leave off the other two.

And if you want an adventure before you eat, try and find the crab in the crab rangoon.