The Magic of Walnut Shrimp….

First off, two thumbs up to Hosea for his Top Chef victory.  Although I really did love Carla a.k.a. side show bob, I was very happy to see Hosea come away with the victory.  Now join me on an adventure through the orient as we discover the magic of walnut shrimp.

China Dynasty – Off the 101 at Johnson in Ventura

I had heard some good things from a few locals who had gone there praising the chicken chow mein, the walnut shrimp, and the beef and broccoli, so I decided to check it out ’cause Mikey loves him some Chinese food, even though you really do get hungry an hour later.

They are located in the Toys R Us shopping center and like most Chinese restaurants they have the antique Asian décor, the koi pond, and the dragon heads and figures.  I’m actually always surprised that Chinese restaurants don’t go for a more modern Chinese look. Staying away from the pastels, and the same general decorations. I’d like them to freshen it up a bit and get some vibrance, life, bright bold colors, modern Chinese art, while doing away with the ancient gold dragons.  Anyway, enough channeling the home and garden network, let’s get to the food.

China Dynasty has your typical menu even as far as having little peppers next to the things that are hot. Peppers must be the international symbol of spicy. I ordered the customary hot tea, and the sweet and sour soup to start, then the bbq pork, walnut shrimp, chicken chow mein, and the beef and broccoli.

The service was nice from beginning to end, everyone is very pleasant and friendly and you almost want to ask what everyone is so damn happy about. Of course maybe that’s how people are supposed to be and it’s just me who’s uptight and miserable. We will delve into my self loathing in later posts. Overall the service was great, friendly, fast, gracious, and pleasant from beginning to end. I can honestly say I’ve never had so many people ask me how everything was.

The tea was typical, no bite or flair. The sweet and sour soup was very flavorful, good consistency, it wasn’t overpowering like some sweet and sour soups can be. It arrived at a great temperature, and I could dig in right away. The bbq pork came first and I gotta say it was very disappointing. The pork either came from the oldest pig on the farm who finally just decided to die a graceful death as a pork dish or they cooked up a large batch in the morning and let it sit all day. It was dry, leathery, and the sauce was bland. I barely ate any of it.

The chicken chow mein arrived and the portion was huge, the chicken was very prominent throughout the dish, and it had very nice, tender pieces of chicken, the noodles were flavorful with just the right amount of oil.  The veggies were crisp and still had that crunch which went great with the noodles. Overall it was a very flavorful chow mein which is good because it should be the easiest dishes to make, as well as one of the most important dishes in any Chinese eatery.

I received the walnut shrimp and beef and broccoli together. First the beef and broccoli: the beef must had called in sick that day because it didn’t show up. It should have been called Broccoli and Broccoli with a special prize in the middle, a tiny slice of beef. The broccoli was well cooked and had this great meaty flavor, but there was just wasn’t enough beef. It saddened me in places I just can’t talk about.

The walnut shrimp was absolutely delicious. The shrimp were big and cooked perfectly; the sauce was sweet and had a wonderful texture. The walnuts are a nice little treat because they had this great sweet honey roasted taste. It tasted like they had been caramelized. The trick to eating the dish was to get a shrimp, a walnut, and a bit of the steamed rice in the same forkful.  It was absolute bliss. This was by far the best dish I had all night and I was actually angry at the world when I had no more left. I may have even scowled at a few of the smiling faces. I’m going to attempt to make this at home, though I doubt I will be able to achieve that dreamy texture and creaminess they produced in such a wonderful dish.

The extras were typical, the rice was fine, the egg rolls are crispy and not too greasy.  They give you an almond cookie and a fortune cookie which is just plain sexy. I love those almond cookies and have never really cared for fortune cookies. That might be because in high school I took this girl out to eat at a Chinese place and she told me that fortunes don’t come true unless you eat the whole damn cookie. Ruined me for life cause I don’t really like the cookies but I’d really like to “have a very successful event possibly occur, at some random time, eventually.” 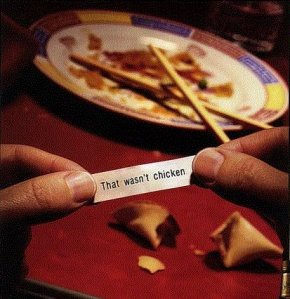 Overall I liked China Dynasty; I recommend the walnut shrimp for sure. It’s a very pleasant restaurant to eat in, and it’s great for families. Also, they are now officially on my hit list for take-out.

One response to “The Magic of Walnut Shrimp….”