So, since we did a comparison of Jack in the Box’s mini sirloin burgers, I thought it was only fair to get the King up on our block and take a look at the BK Burger shot.

We have two slightly different marketing schemes with these burgers.  Burger King actually labeled their burgers a shot, so basically you can’t really expect much from it.  Jack in the Box went more with the meat quality and threw in the word mini.  However Burger King does still claim to flame broil everything so you should still expect a fairly tasty burger.

You can see by the picture below the marketers are still spreading the visual lie.  There is a huge difference between the playboy centerfold BK Burger shot and the picture I took.  The meat difference is incredible and so is the shot of the pickle and the bun.  The picture comparison is much worse than Jacks and they don’t even have the great jingle.  Burger King is left with Kingons and girls in the park drooling over some dude holding the cute little burger.

I stacked the BK shots just like the Mini’s and you can really see the difference in the meat and sandwich quality.

What makes the BK shot worse is that the bun is extremely doughy.  They slop on way too much mustard and ketchup, the pickles are small, and the little grey burger is tasteless.

I also did a shot of them next to the can, like we did with Jack’s, and you can see the height difference.

These burgers don’t even equate to the White Castle burgers you can get in your local grocery store’s freezer.  Rather than eat them, I would throw them at people who say stupid things like, “How about this heat?”

The BK shot does have one thing going for it: it comes in a six pack.  On the box there are instructions just in case you forget how to eat a hamburger or are just stupid in general.  I’m picturing a person staring at the box, wondering what to do had there been no directions.  Is there someone out there with a BK shot in their ear hole? 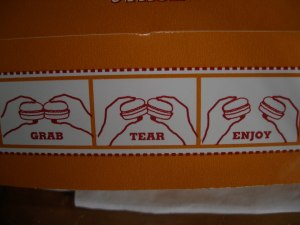 Don’t believe the lie folks.  Go somewhere else for your mini burger fix.  Again, I guess you could always buy them to throw at people who say “WE”, when they talk about their sports team.

“How about those Chargers?”

“We really need to get a new offensive coordinator and our line is short a good pass rusher.”

“Yeah alright jackass like you’re a member of the Chargers organization.”

Here’s a burger shot in your ear!