Greetings from scenic Simi Valley.  For those of you following my adventures on Twitter you already know about my horrible toothache.  Well, I tried calling the dentist to get an appointment but they were already gone for the weekend.  So, I decided to do the next best thing… which is, of course, reviewing an ice cream shop. 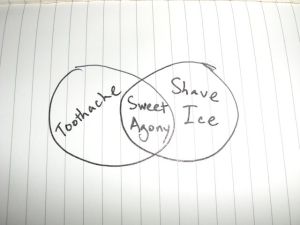 My initial idea today was to find a place where I could review a milkshake, and because I didn’t want to go to a Baskin-Robbins or Coldstone’s, I decided to give this place a try.  Come to find out, Tutu’s doesn’t have milkshakes (yet).  But you know how I roll.  I’m like freakin’ MacGyver when it comes to ice cream.

I’ve driven by Tutu’s about a hundred times since moving to Simi Valley and I’ve always been a little nervous about trying it.  The main cause of my hesitation is the fact that the shop is located in a run-down little shopping center that falls into my “ghetto” category.  As a man, I also felt a little silly going to a place called Tutu’s, but we can leave my gender issues for another day.

So anyway, as I walk into Tutu’s I immediately notice that there is a lot going on.  Shave ice, ice cream, dole whip, popcorn, coffee and candy were all on the menu.  Normally, I’m a fan of businesses that do one or two things great as opposed to one that does a lot of things that are mediocre.

I was greeted at the door by a guy named Scott who turned out to be the  owner.  When I asked what was good, he immediately handed me a sample of their dole whip, a frozen pineapple and coconut concoction with the consistency of frozen yogurt.  I thought you could only get that stuff at Disneyland.

I only made it through about half the sample before the agony of my tooth caught up with me.  Oh well, like a good soldier I decided to press on and see what else this little shack had to offer.  I found out that this place has two kinds of ice cream to choose from.  One is a local distributor called Dandy Don’s, the other is the famous Lappert’s Ice Cream of Hawaii.  I tried a few flavors of both brands and was happy, if not blown away, with each flavor I tried.  If you get ice cream at Tutu’s, my suggestion would be to try a little sample of the flavor you want, just to make sure it has the consistency you’re looking for.  For example, I found the Lappert’s blueberry ice cream to be very light compared to the coconut which was a little on the thick side.

One of the cool things about Tutu’s is that they offer the little things that other places don’t.  Is your shave ice not as flavorful as you like?  They’ll remake the syrup.  It’s that kind of a joint.  Plus they are the only place I know of that has a birthday cake ice cream that tastes like buttercream frosting.  We’re not talking cake batter ice cream here, this is a whole new ballgame (and you know how much i love cake.)

With around 70 flavors of shave ice (including some sugar free ones), Tutu’s is never going to run out of things to try.  I ordered a shave ice called the crater (cherry, orange and blackberry) which looked like, well… a crater. 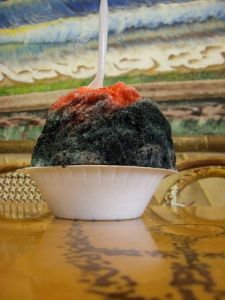 I also got a little scoop of the coconut ice cream underneath the shave ice to accent all the fruit flavors.   It didn’t have the long strands of coconut shavings that I hate, but it did have that taste that instantly reminded me of all those summer days my mom spent chasing me around Zuma beach with a bottle of Coppertone.

The shave ice was trimmed in a hexagonal shape and included hand carved “flavor grooves” to allow maximum syrup absorption.  Ok, I made that last part up, but it really was the best shave ice this side of the pacific.  Needless to say, I ate my way to the bottom of the crater leaving an empty bowl that closely resembles the inside of my pulsing tooth.

Call me a masochist, but it was well worth it!