This is a classic EatmeCalifornia drive by. Nobody told me to visit Mr. Lee’s and nobody said they had great food.  It was a ninja ambush of the highest degree. Would Mr. Lee be ready for culinary combat? 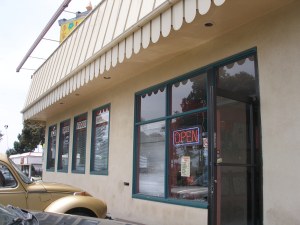 I took a picture of the outside of Mr. Lee’s and it was definitely not my best work.  I decided to take another one after lunch because I was pretty hungry.  Mr. Lee’s is fairly small and only has one dining room.  I’d say, at the most, 50 people could be comfortable.  After that, it would get to be more like a clown car.  The inside is pretty beat up, the ceiling is stained, the walls are a bit dirty, and there are a lot of patches and covering.

I experienced an EatmeCalifornia first at Mr. Lee’s.  My waiter never said a word to me.  I’m not exaggerating; I’m not just saying he mumbled, I’m saying he never spoke one word to me.  They sat me down, brought me water and tea, gave me a menu and then did a ninja vanish.  5 minutes later he re-appeared with notebook in hand, stood by me and waited.  I had said hello at my arrival but now the ninja battle of silence had begun, so I decided not to talk as well. END_OF_DOCUMENT_TOKEN_TO_BE_REPLACED

The only one in Golden China

Got some requests for more Chinese food so I hit up one of Ventura’s older places, right off of Seaward.  You can see it from the 101 and from what I hear they are more popular for their Karaoke nights then they are for the dining.  I’d actually been there before.  A few years back I hit up the bar with some friends and sang Enter Sandman, but I’d never had the food before.  Off we go to a very large Chinese Restaurant called Golden China. END_OF_DOCUMENT_TOKEN_TO_BE_REPLACED