The second season of Man Vs Food started last night so I thought it would be kinda cool to follow along this time.  Adam Richman is a fellow foody who goes around the US trying food challenges from different joints.  If there is some kind of mass food challenge or a spicy food challenge, he tries it out.  In the second season opener he is in San Antonio attacking Chunky’s legendary 4 Horseman burger. 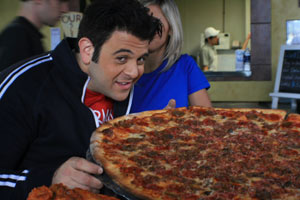 Adam starts off his trip at a place called Big Lou’s.  Big Lou’s is the home of the 42 inch pizza.  If you can’t comprehend how large that is, take out a measuring tape and expand it 42 inches.  The pizza is 30lbs.  Big Lou’s is family owned and they actually have a custom made oven and can hand toss 42 inches of dough.  This thing was massive, even larger then Brian’s vocabulary.  There was 6 pounds of cheese on this thing!  Adam held up a slice and it went as far as a suit tie.  Plus they have a bbq beef topping that they actually slow cook and then slice up for the pizza.  We’ve got to make our way to San Antonio to try this thing. 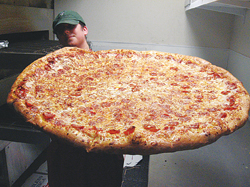 Adam’s next stop was Lulu’s Bakery and Café, which is home to the 3 pound cinnamon roll.  These things are huge too.  Just watching them make a batch was amazing.  They roll out 6 and a half feet of dough, cover it in butter, sugar and cinnamon, then roll it up and bake it.  Then they cover it in more butter and add tons of frosting.  You could use this thing as a pillow while you eat it.  Kinda sounds like one of the fat guy’s levels of heaven.  In addition they have this huge chicken fried steak, which is a monster.

Adam finally makes it over to Chunky’s to under go mortal kombat with the four horseman burger.  It’s not that it’s just some large burger, but it’s covered with four different ingredients: Jalapenos, serranos, habaneros, and the infamous ghost chili, which is the hottest chili in the world.  The rules are simple: you must eat the burger in 25 minutes, without the aid of any milk or ice cream.  If you can do that, you need to hang on an additional five minutes without the aid of any spicy solvents.  Only 4 people have done it at Chunky’s.  Would Adam get his picture up on the wall of fire?

Personally, I can’t do extreme spicy to that extent.  A quarter of that burger and I’d blow out an o-ring and be sitting on the throne for a month.  My system is just not meant to handle extreme heat.  Ten years ago?  No problem.  Now, I get too spicy of a mustard and I’m doing the green apple quick step.

They actually give Adam gloves to wear to eat this thing because of the chilis.  That, in itself, puts up the “thanks, but no thanks sign” in my stomach.  They dice up and cook all the chilis together and even the chef has to be careful not to get too close.

The clock starts and Adam digs into the first quarter.  He is sweating like he’s a mad man hearing voices tell him to beat old people with wiffle ball bats and 6 minutes goes by before he can get it down.  He gets on more of a roll as he burns through the rest of the burger but he looks physically ill.  This is certainly not a burger you get to enjoy.  There are just a couple minutes left as he is knocking down the last portions.  He looks like he just ran the LA marathon and tries to douse himself with water to try and cool off. As the clock ticks down he gets it done.

He then has to wait an additional 5 minutes as the chili’s burn a hole in his spleen.  He manages to hang on and is greeted by a tall glass of milk.  This guy is not a competition eater, but by the look of it, he should be.  With his picture on the wall of fire, Adam celebrates.

I’m looking forward to some of the other visits he pays to the great places in our restaurant world. The show is on the travel channel, Wednesdays at 10pm and is definitely worth the watch.  I’ll try my best to get you some pictures of the food he eats but it may take a while to find them.