Shows that make you wanna eat

I am taking a day off from throwing another food joint at you to go over something that I realized while watching the Sopranos. If any of you have ever watched the show, you know that Carmella spends half the show in the kitchen whipping up Italian dishes.  Along with her you have Artie cooking all the time and most of the cast is usually eating or drinking.  As I’m watching I look down and realize I’m eating the lasagna I just made the night before.  Everytime I watch this show I want to eat something.  They have such great food on the show that it actually drives something in my brain to eat.  I guess that’s better than the other vices on the show.  I haven’t started threatening the locals for protection money or working out of a strip club.  Though the latter has some appeal.

The top of my list is probably the Sopranos.  What else hits that impulse in your brain?

Not all cooking shows drive the impulse for me.  I love watching Hells Kitchen, but it doesn’t make me wanna eat.  I think there is too much reality and not enough food.  I find most of their dishes ok, but none of them inspirational.  Though the show does kinda make me wanna go to a restaurant and call the service staff cows.  Gordon does have some shows that make me want to eat.  The F-Word is a great show and it’s definitely a huge change from the Fox reality show.  Gordon’s other show Kitchen Nightmares also has face stuffing potential.

Top Chef definitely made me want to eat.  They always had great dishes on that show and it was packed with recipes and great combinations.  It also made me want to go where these Chefs work to try their food.

I seem to want to eat when I watch Survivor too, and I think that is mainly just because they’re not eating all that much and watching people getting thinner makes me kinda hungry.  Though I gotta say when the show first started the contestants really used to not eat much and dropped a lot of weight.  Now it looks like they give these guys a regular supply of food so there not needing to “survive” as much.

Deadliest Catch makes me want seafood like nobody’s business. I’ve had to make trips for crab legs and lobster on several occasions while watching the most dangerous job.  That reminds me, the new season starts tomorrow so make sure you guys watch it on Discovery.  We will be reviewing episodes here on our site.  It’s a great show and B and I had the pleasure of actually meeting one of the crab boat Captains.  We took a little trip to Rancho Cucamonga and met Captain Sig Hansen of the Northwestern.  Really nice guy and gave what was soon to become EatMeCalifornia a great autograph on a picture of his boat. 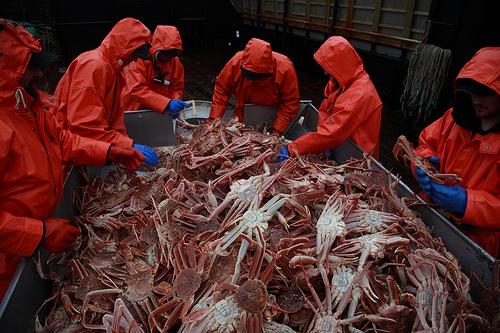 I watched the start of Last Restaurant Standing on the BBC and at the beginning I did want to try some of their food.  Then you start getting a headache from trying to understand Raymond Blanc talk and the urge to eat goes away. Trying to translate his horrible English and listening to the horribly boring music killed my appetite, so I had to stop watching it.

The show Las Vegas always made me wanna hit up Vegas and get down on some great buffets and dinners so I’d always eat watching that show too.

The Tudors also has great feasts going on. It’s a great show for eating, drinking, and beheading your wife because she may be sleeping with her brother.

There are also the opposite effects of certain shows, like House which makes you want to stay away from food because it may kill you and only one person in the United States might keep you from dying.  Not a good thought for us West Coasters.  All the great doctors seem to be on the other side of the Mississippi.

Or is it just me?

2 responses to “Shows that make you wanna eat”