Kid Rock, a Boat in Koreatown & Awesome BBQ. -OR- How I Spent My Sunday.

Sunday is a day of adventure, a day where I can get away from the trivial things in life like “getting a job” or “making something of myself,”   This Sunday was no different. It started off with a plan, a good plan too, but I accidentally left it at home.  Lucky for me I had a navigator.

The one thing I knew I wanted to do was get some culture at LACMA (L.A. County Museum of Art) which by my reasoning should be called LACMOA, but apparently the powers that be consider that less arty.  Anyway, they have an awesome exhibit until the end of the month called Vanity Fair Portraits 1913-2008.  Go see it.  I promise you’ll be happy you did.  Don’t spread this around, but they actually have a picture of Madonna where she doesn’t look like skeletor.  Also, on the drive down we ran into Kid Rock (or a member of his immediate family) in Koreatown.

After leaving LACMOA, as I shall now refer to it, we backtracked through Koreatown in search of lunch.  That’s where we found Cafe Jack, located in what appears to be the hull of a large fishing boat.  Being the adventurous type, I swerved into the parking lot, not wanting to let the opportunity pass me by. 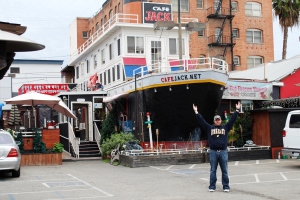 Aside from the novelty of taking this photo, the place itself was actually kind of disappointing.  Maybe it was because it was 2:30 in the afternoon, but it was completely empty.  From what I read later on yelp, this place is more of a late night spot.  Obviously they like sticking it to the drunks because everything on the menu was about twice as expensive as it should be.

Honestly the look of the place was cool, but If i’m going to pay $6 for a cup of regular coffee, it better be served out of Bar Rafaeli’s navel. Don’t even get me started on $10 for Fro-yo.  I don’t know about you, but ambiance isn’t the first thing that comes to mind when I think about eating in Koreatown.  Just give me my spicy noodles and nobody gets hurt.

I felt sorry for the lonely girl who had to serve us, so I faked an urgent phone call and got us the hell outta there.  We jumped back into the car and headed over to South Pasadena, and that is where we found one of my new favorite BBQ restaurants.  It’s called Gus’s, and here’s your review:

Ok, so I know I’m going to sound like a bit of a Gus’s homer after only eating there once, but this place is awesome!  If you’re driving down Fair Oaks, you can’t miss the huge red sign for this South Pasadena landmark.  They have a small parking lot next to the restaurant, but there is street parking available if it’s full (it was when we got there).

As far as the inside of the restaurant goes, it has recently been given a modern update.  It probably needed it since the place opened back in 1946.  The restaurant features a nice bar area, plenty of booths, a few large tables, a private dining room for bigger groups and a nice little counter area that faces into an open kitchen.

We grabbed a couple seats at the counter and were greeted quickly by our server.  When we asked her what was good, she gave us her personal favorites and showed the kind of knowledge that most servers just can’t provide.  She offered us the special appetizer for the day, which happened to be fried pickles.  Seriously, fried pickles.  Are you kidding me?

Gus’s does all kinds of regional BBQ so the spices and sauces for each type of meat are different and authentic.  You can get Texas brisket, St. Louis spare ribs, etc.  I opted for the Memphis style babyback ribs and Carolina pulled pork combo with sweet potato fries and red beans & rice.  My navigator got the Southern fried chicken with the babybacks, regular fries and creamed corn.

We didn’t drink any booze, but Gus’s has a fully stocked bar and a decent wine and beer selection.  I got a diet coke, and I have to say that I our waitress made sure that it never even got close to empty.  Because of that, I got to visit their bathroom a couple times, and I must say that it was as clean and modern as the rest of the place.

As our food made it out to the counter, the smell had me salivating.  I decided to steal a bite of the fried chicken first, and was instantly digging the crispy goodness.  It was moist on the inside but not greasy at all.  Next I added some of Gus’s spicy BBQ sauce to the pulled pork and had my first big bite.  It was magical.  I don’t think i’ve ever had pulled pork this good.  I swear I had the stuff running down my chin and couldn’t care less.  The last meat I tried was the babyback rib.  Instead of describing it though, I just want to show you a picture. 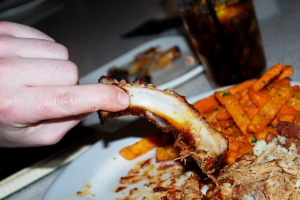 falls right off the bone...

The sides were nicely done, but they were over-matched next to the meat.  The one common theme that I noticed was that everything was incredibly authentic.  I’ve had better fries, but I don’t pick a restaurant on the quality of their fries.  My whole combo plate was $19.95, which is a great value considering they gave me about twice as much food as I could actually eat.  We took home leftovers, but I’m sad to report that none of the ribs made it out alive.

On the dessert front, they are now serving a cast iron baked cookie. (think BJ’s pizookie)  Unfortunately, our waitress didn’t ask us mid-meal if we wanted one, so it was going to take an extra 30 minutes to make.  Instead we opted to take home a slice of their Red Velvet cake which was tasty, but average as cake goes.  They do get bonus points for doing red velvet though, because most restaurants stick to easier fare.

Burger fans should know that Gus’s has great options for them as well.  Actually, we saw about twice as many burgers flying out of the kitchen than anything else.  When we go back, I’ll be sure to update the post with a burger review.

Finally, as if all of that wasn’t enough, Gus’s also does breakfast on Sundays until 1pm.  They do all of the southern favorites like biscuits and gravy, grits, chicken fried steak and eggs, as well as decadant pancakes and waffles.  Since I judge a good breakfast by how good the chicken fried steak is, I suppose that is where I would start.  Where you start is up to you, just promise us you’ll leave a comment if you hit up Gus’s.  Actually, call me before you go.  We can carpool.

One response to “Kid Rock, a Boat in Koreatown & Awesome BBQ. -OR- How I Spent My Sunday.”