Here we are at the season finale of Kitchen Nightmares which of course for me is a bummer because I love this show and EMC are huge fans of Gordon Ramsey. Luckily though we go from Kitchen Nightmares right into Master Chef. We did not get a chance to review the first season of Master Chef last year so I’m looking forward to it this year. In addition I have a few more episodes of Kitchen Nightmares to throw on here as my dvr had mono for a couple weeks and did not record some of my shows. Grab a beer and your favorite crawdad and lets head to New Orleans to Oceana.

Last week was twins, this week we got just plain brothers. Don’t worry folks these brothers are not only brining back the George Michael stubble look but they are also crazier than our main man Charlie Sheen. Sorry Charlie we had to throw you in the mix at some point. We also have a red cheeked angry head chef thrown into the mix creating a wonderful red cheeked, gold chained, stubbly, greasy haired anger tornado. Good luck Gordon! 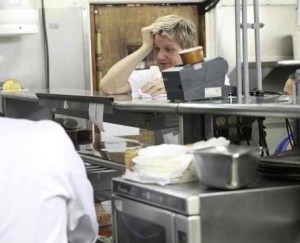 The Ocean located on Bourbon St making it prime stop for tourist and locals. Owned by brothers Moe and Rami who bought it from their father they spend wonderful New Orleans afternoons yelling at each other, the staff, the tourists, the dogs, the Levies, the street lamps, and the food. I seriously can’t understand how they have a staff. There has got to be a better job than this place. I’d rather be a Wall mart greeter. I’d rather be in a Nicolas Cage movie. Hell, I’d rather be the guy who hoses down the streets after Mardi Gras than work for these guys. What’s really great is that the only things that aren’t angry in this place are the cock roaches and the rats that are living off the fact these guys can’t clean to save there angry lives. END_OF_DOCUMENT_TOKEN_TO_BE_REPLACED