Deadliest Catch – Ends of the Earth

It is absolutely, positively, seriously chilly out on the Bering Sea now.  With temperatures hitting forty below, with wind chill and constant rain and snow hitting the fleet, fishing is at its absolute worst so far.  Any fan of the show, of course, knows that it can go from bad to horrible in just hours.

We left off last week with the Northwestern stuck outside St Paul’s with a boat load of crab.  Captain Sig, getting tired of sitting around, decides to pave his own road through the ice.  You can see the paint come off the boat as he inches through to the dock.  After some pushing and shoving, Sig bullies his boat in and gets his crab off-loaded.

The workers and Sig’s crew work to get the boat off-loaded and out of the harbor before it freezes over again and after being stuck for two days they are finally back out to sea.  Captain Sig gets the crew right back to work hauling gear and they find out they are in the middle of a crab junk pile.  Tossing more then they are keeping, it’s slow going and the crew starts getting worn out with all of the sorting.  As any Catch fan knows, Captain Sig thinks the idea of sleep is for those people who don’t crab fish.  In fact, the basic concept of sleep irritates him.  I’m pretty sure he against eating and peeing too, if it takes the crew away from fishing. 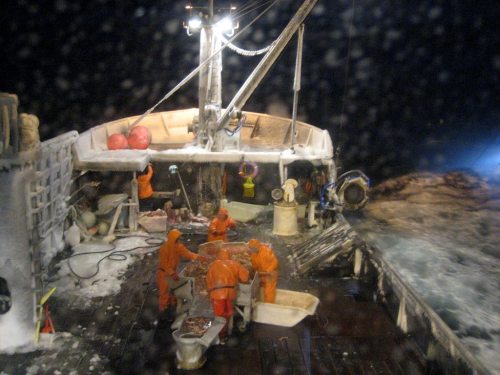 On the Incentive, Captain Harry has been far south of the ice pack and can’t seem to even catch a cold.  When he finally does start catching crab it turns out to be the crab on the wrong side of the tracks.  The crab that fights the law, does drugs and hangs out in seedy neighborhoods.  The infamous dirty crab.  Covered in barnacles, the crab can’t be sold.  They are turned down at every market because nobody wants a crab that hangs with barnacles.  They don’t change the taste of the crab at all, but just like Andy Rooney, they are just not pleasant to look at.

Captain Harry takes the Incentive north and starts some prospecting in some un-touched areas.  The gamble pays off and the Incentive is on the crab. However, Mother Nature just missed Oprah and she’s pissed.  She sends the Incentive temperatures below zero and as they bring in the crab, the crab freeze.  When an opi freezes it drops its legs and becomes more of a crabby hockey puck.  It becomes a race to get the crab in the hold before they freeze.  It’s either that, or buy them little parkas.

The Wizard is back in town and Captain Keith gets his brother back along with a new green horn, John.  Lenny jumps ship and goes back into retirement and the Wizard is off to get back in the hunt.  With Monty hurt, Keith has to spend more time on deck, helping his crew.  Still, he seems to be able to get right back into the swing of things.  The Wizard finds an interesting place to put their pots and you’ll learn more about this in a bit.  First, we have to deal with 40 ft waves that hit the Wizard so hard that they wedge greenhorn John under the launcher. Brother Monty calls the crew in, as it just gets too nasty to be out on deck.

The Cornelia Marie is on the crab and battling changing tides and sinking buoys.  The buoys angles change so much that a boat roll catches deckhand Freddie’s hand in some line and almost pull him overboard. Freddie’s hand gets bruised up, but he just rubs some crab in it and moves on.

The crab counter has the Wizard in front, followed by the Incentive, the Northwestern, the Time Bandit and then the Cornelia Marie.