Maki Yaki is a franchised sushi joint.  I guess you could say it’s the Arby’s of sushi.  It’s not as fast food as a San Sai, but it is more fast food than your locally owned sushi restaurant.  The question remains, though, how does the quality stand up to other sushi restaurants?

Maki Yaki – On Thompson in Ventura – Also with many locations in CA and surrounding states. 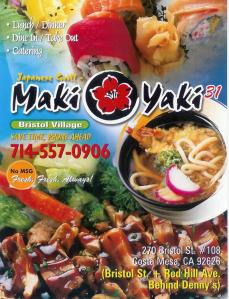 I was at the Ventura location, not this one.

I had some sushi peeps tell me about Maki Yaki (the one in Ventura) as a very reasonable place to get sushi, as far as the price and quality. The prices are reasonable, but like I said earlier, and what my peeps didn’t know, is that the prices are a couple bucks cheaper because it’s all mass produced.  This is one of those places that can produce mass amounts of sushi in very little time.  The fish arrives in various states and when you walk into one of these you really do feel like you’re in an Arby’s. They have a fast food counter and dine in seating.

I thought it would be a good idea to get them on EatMeCalifornia just because, as sushi goes, driving by one of these you may or may not know it’s fast sushi.  They have hand rolls, cut rolls, specialty rolls, and the regular chicken and beef teriyaki.

I ordered the tuna, salmon and yellow tail.  I also ordered a shrimp roll, a salmon tempura roll, and a spicy tuna crunch roll.

The tuna was low quality.  It more or less broke apart and had a bit of an aftertaste.  The salmon was not too bad.  It held together well and was firm and fresh.  The yellow tail was a little bit off.  If I was guessin’, I’d say they don’t sell enough to keep it as a fresh item.

The spicy tuna crunch roll was bland because the sauce had no flavor.  Rosie Perez is spicier than their tuna and just like the sashimi, it fell apart.  The rice was over-cooked and the tempura crunch topping was stale.

The salmon tempura roll was not too bad.  The salmon, being the better quality fish here, was actually baked.  It had a great flavor and went well with sweetened soy sauce.  The problem with this roll was the carrot slivers that they put in them.  They were not ripe and threw off the flavor. I didn’t like having something squishy and then, all of a sudden, hard and crunchy. Cucumber works well because it’s just crunchy enough.  Carrot that’s not ripe… way too crunchy.

The best roll of the bunch was the shrimp roll because when it comes down to it, it’s hard to mess up shrimp.  It’s definitely the safe roll in most places you go.

To compare it to the other fast food sushi, San Sai, would be wrong because San Sai is truly fast food Japanese and is probably the Panda Express of Japan.  Also San Sai is more expensive then Maki.  I would get sushi from Maki way before I bought it from Vons, Costco, or San Sai.  The quality is better then those places and their prices are still reasonable.  Do not, however, get fancy in these places.  Stick to the basics.  This would be a good place for those of you who are just starting to get to know sushi.  Their sushi menu is huge and their rolls aren’t horribly exotic.

For sushi lovers, and those of you who take your sushi seriously, this is not the place for you.  Stick to the locals you know and trust.