Simi Cajun Festival ’09 – Gator Does Not Taste Like Chicken

I’ve been looking forward to this day for quite a while.  The Oxnard Strawberry Festival was just a warm up.

The Simi Valley Cajun Festival is easily the best thing going on in Simi all year.  I love spicy food, I love peoplewatching, I love exotic meats served on sticks.  Therefore, this is as close as I’m ever going to get to heaven.  Plus it’s in Simi.

I’ve been to this festival before, but I never realized it was a music festival.  I guess the multiple stages should have tipped me off, but they didn’t.  I think what finally did the trick was this guy: 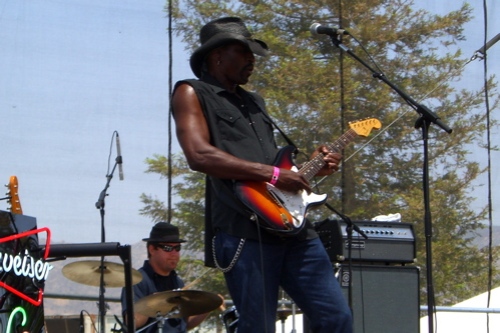 But for me, it’s always been about the food.  I am a fan of all things Cajun: hot links, jambalaya, crawfish, gumbo and after trying it for the first time, gator on a stick.

Gator does not taste like chicken.  It’s actually more like pork.  It does look like chicken, which kinda threw me for a loop before I took my first bite, but it’s definitely more pork-esqe.  It was nice.  At $9 a skewer, I didn’t go back for seconds though.  There was just too much food to sample.  We got our gator from the Maverick’s tent.  They do it every year for the festival and they also do a pretty good breakfast on the weekends, right at the corner of Stearns and Cochran.

But gator wasn’t all that Mikey and I consumed.  We ate about 500o calories worth of other stuff too, including:

This is a Pig-In-A-Bag, which is easily our winner for most retarded food name o’ the day.  It’s really just a bunch of pulled pork thrown into a tortilla.  As far as I was concerned, the sauce on the pork had a little too much tomato flavor.  Still, the pork was pretty juicy and despite the horrible name, I enjoyed it.

The fish taco and cajun sea bass came courtesy of our friends at Spencer Makenzie’s. (Their website is under construction but you can download their menu)  I had a fish taco because I am skeptical whenever Mikey pronounces something “the best.”  In this case, he may be correct.  The fish was fried, but extremely light.  Almost airy.  The batter was crunchy and salted just enough and the sauce was thicker and more flavorful than any I’ve had.  The sea bass was nice and spicy, but cooked perfectly.  It almost melted in my mouth.  Sea Bass is one of my favorite fish, but I think that I can objectively say that this stuff was awesome.

The shrimp kabab was pretty standard issue.  It had some token bell pepper and onion along with 3 medium sized shrimp.  The shrimp were juicy and not overdone, but they lacked any kind of real seasoning.  If there was any seasoning on them, it was because they accidentally scraped it off the grill. 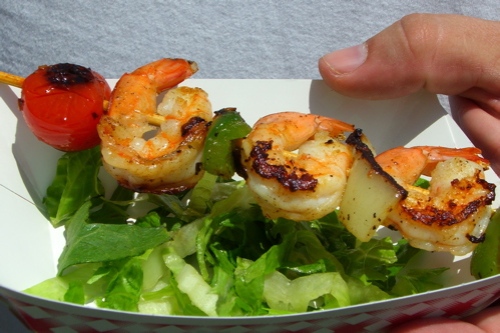 Wanting to cover all of our bases, Mikey and I also got down on some delicious sweets.  As a warm-up and since it was the cajun festival, I insisted on beignets (pronounced BEN-YAYS) which are kind of like a cajun donut.  It’s dough that is fried to a golden brown, rolled in powdered sugar and served warm.  They are fantastic and make me want to drop a few grand to get my own industrial sized deep fryer.  Plus, you get the added benefit of getting powdered sugar all over your face, clothes and in various other hard to reach places.

Mikey’s deal of the day came when he found a vendor selling saltwater taffy (2 Bags for $5)  I tried a couple pieces which took me about an hour to eat.  Clearly Mikey will be getting several weeks of enjoyment from the rest of his double bagger.

Just before we left, I got my dessert: a mini sweet potato pie.  Mikey was pretty content with his taffy, so he opted for an adult beverage instead.  My pie was perfect.  They served it in it’s own little tin.  The pie was sweet, but when combined with the flaky crust, not obscenely sweet.  Mikey was served a “strawberry” mojito, which is code for “Oh, crap!  I just gave that dude a hurricane.”  Because Mikey is a lot more diplomatic than I am, he drank it without complaint. 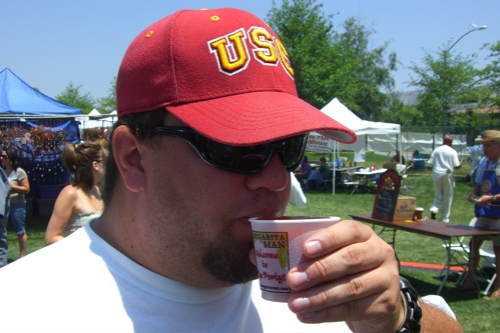 On our way out, I decided to stop by the booth for a little company, based out of Santa Paula, called Red Hot Foods.  They have tons of salsas and hot sauces for the spicy food fans out there.  I especially prefer their Red Savina Mash, which I add to other salsas to make them spicier.  The Red Savina pepper is the 2nd hottest chile in the world, behind the infamous ghost pepper of India and Southeast Asia.  If anyone knows where I might be able to get my hands on a ghost chile, let me know.  I’d love to do a post on it for the site.

This year’s Cajun Festival seemed to have a lower turnout than years past, which was surprising considering it was the 2oth anniversary.  Still, it looked like everyone was having a great time, so maybe that’s all that really counts.  Actually, the only thing that really counts is that Mikey and I had a great time.  We even made a few friends along the way. 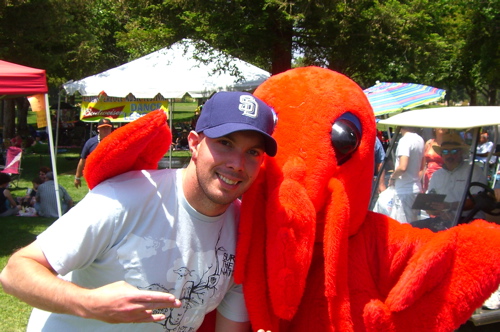