Lately, I’ve been on a bit of a craft brew kick.  Actually, that’s an outright lie.  I’ve been obsessed.  Since leaving San Diego, I have been searching for the camaraderie and creativity that only craft brewing has been able to give me.  Don’t get me wrong, there are lots of useful pursuits out there.  But not many are as interesting as the purposeful brewing and joyful consumption of my beloved beer.

My buddy Dave and had I brewed our own Double IPA.  I guess what I’d like to say about it (because the wound is still a little open) is that it was a learning experience.  Looking to increase my knowledge in local beers, as well as a way to drown my sorrows, I decided to go find a small brewery in Moorpark called Enegren Brewing Company.

The idea of being able to visit a brewery is a fairly new development in the beer world.  It has only been with the explosion in home brewing, that the concept of beer as science and craft has been made available to the masses.  There are ancient breweries in Germany, Belgium, and Ireland that had been painstakingly crafting the same beer for hundreds of years protected by rows of razor wire, explosive ordinance and monkeys packing Clint Eastwood-like Colt .45s.  All that changed when the common man rose up against such tyranny and began the crusade for free beer.  (Well, you still have to pay for it, but you get what I mean…)

The people of Enegren embrace this counter-culture approach to beer.  When you walk into their tasting room, the smell of a fresh batch of grain, boiling with anticipation of its destiny, often hangs in the air.  On the wall, displayed like a work of art, is the schematic for their brewing operation.  Rather than hiding their process from “the competition,” they seek to educate and inform on how this nectar of the gods is made. 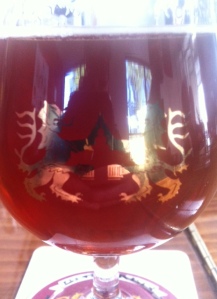 A glass of the “Protector” IPA

Anyway, enough soliloquy on the freedom of beer.  Here’s what I think about the brewery that is Enegren. END_OF_DOCUMENT_TOKEN_TO_BE_REPLACED