First off, I just want to say I know you guys may be wondering where B-money is and why you have to suffer through just me. Brian is in the Amazon with a small tribe teaching them how to play electronic battleship and how to make jiffy pop.  He will be returning soon to bring you some of the great places to eat in and around the world.  First, he must find a Starbucks with internet. Until then, curl up next to your favorite stranger, who you just met in that club last night (when you were so hammered you attempted to convince the bartender that George Lucas is not so great with special effects but he writes some of the greatest dialog the world has ever heard on film) and take in the glory that is Man Vs Food.

Adam is in Charleston taking on fresh oysters, shrimp and grits, the big nasty, and the spicy tuna rolls at Bushido. Each tuna roll gets hotter and the entire meal consists of 10 tuna hand rolls. Can Adam eat all 10 rolls?

Adams first stop is to the Hominy Grill for some shrimp and grits.  The shrimp is caught locally and made with homemade grits for a fantastic meal.  Most places serve shrimp from miles away and brought to the restaurant under Gordon Ramsey’s favorite term – fresh frozen.  Anytime you can get seafood caught on the same day, from water just a stones throw away, it is definitely a bonus.

The real story at the H-Grill, however, is the “Big Nasty”: a sandwich made with a huge piece of fried chicken, covered in white cheddar, and smothered in sausage gravy, in between two fluffy homemade biscuits. It’s a beautiful cardiac arrest sandwich.

Adam’s next stop is to Bowens Island for some fresh clams. Adam actually goes out to these rocks out in the water around the island area and removes chunks of clams off the rocks.  From there they steam them on this huge flat grill covered in wet burlap sacks.  They are served with shovels and you just bust them open and throw out the shells in the table receptacle hole.  I’m on the fence about oysters to begin with, but there was nothing really appetizing about watching them put this together.  I’m sure its fantastic, but so far it wasn’t one of the more remarkable or desirable locations. 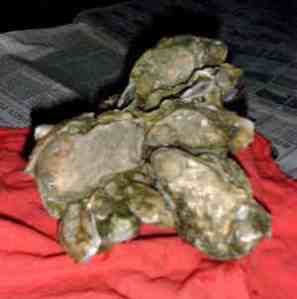 Finally we get to the battle we’ve been waiting for. Adam goes to Bushido to take on the spicy sushi roll challenge: ten tuna hand rolls, eaten one after the other and each one made hotter than the last.

The first 7 rolls are made with a Thai chili sauce with some other secret ingredients that get spicier.  The final 3 rolls all have full chopped peppers inside.  The number eight has the habanero.  The number nine has the Thai green chili, and the number 10 has the Thai red chili.  These are extremely hot chilis and to have full chopped peppers in each one would make this a very hard challenge.

What made me think he would have no problem with this challenge is that they are tuna hand rolls.  Most of us sushi pigs can take them down in just a couple bites.  If he just powered them down he’d only have issues in the restroom 30 minutes after the filming.

Of course only 8 people had done it so far, so maybe it’s harder then it appeared.  Victory gets you the most honorable head band and all employees in the restaurant must bow to you.

Adam takes down the first 7 rolls with ease.  He struggles a bit with roll 8, but then powers through the other 2.  As I figured, he handled it pretty easily compared to some of the other challenges so far.  Although he may have to go to pep boys later and buy a new o-ring.

I’m pretty sure I could do it too, because I can take in sushi like a humpbacked whale.  It would just be in the aftermath that I’d worry about. I’m sure I could pull through but Neosporin, neighbors evacuating, and fabreeze would be involved.

Come back soon B, I’m running out of poop jokes.

4 responses to “Man Vs Food – Charleston”