First off – Raise your glass to the King of Pop. No matter how funky, odd, or down right strange you thought Michael Jackson was, you can not deny he put together some of the greatest music we’ve ever heard. I myself even had my own red leather jacket and glove back in the 80’s. Yeah that’s right, I did, and I’m proud of it. Anyone who doesn’t think Bad and Thriller contain some of the best beats in music history probably smells like cheese and shops at gas stations for groceries. Of all the Jacksons we could have lost I would have prefered Tito since he always looks like he’s up to no good. Right now you all need to head to your local karaoke joint and pick a song. If you pick Billy Jean you best do a leg snap and a crotch grab. Shamon!

Ventura has its own award winning micro brewery. The Anacapa Brewery recently won some major awards at the LA County Fair. Winning ribbons at this fair for beer is definitely something to boast about. Brian and I had already decided to get our drink on there before we knew about the awards, but after tipping back a few of their classics it was easy to see why they won.

For this review we are going to concentrate on beer, beer, and then on some beer. Of course we will throw a little food in there but not too much because we don’t want to ruin your buzz. Plus, any night you’re going to be out drinking you need to lay a nice foundation before you drink, pizza, bread, burgers, burritos, you know, stuff that will soak up the tremendous amounts of liquid that are about to invade. 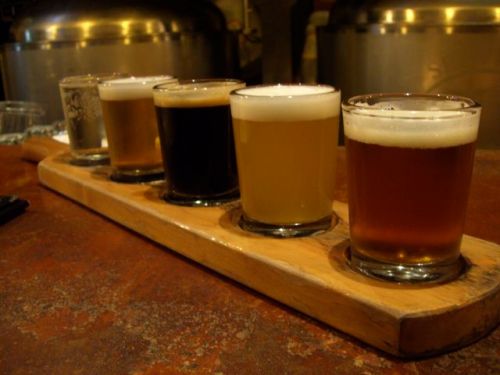 Drink it in Ventura, it always goes down smooth.

B and I both started off with a sampler of the beers to get a little bit of everything. You get an espresso stout, blonde, ipa, a wheat, and their pear cider. First off, the espresso was way over the top for me, but that doesn’t make it bad. If you like espresso you may be in for a real treat. If you don’t like espresso then your gonna make a face like you just got hit in the jejunum. It is really strong. The IPA is bitter. Just like it should be and pretty much covers all the ground an IPA should. The blonde is clean and crisp and would be perfect for runners at the LA Marathon instead of that water and Gatorade they pass out. The wheat is good and I pretty much will only order wheat’s right from the brew houses that make them otherwise they taste kinda funny to me. The pear is like a little pear spritzer its good for those of you who like pretending they are drinking an adult beverage. It’s really sweet and reminded me a lot of what I used to buy for girls to make sure they’d show up to my parties.

The Brewery itself is a nice little place. There is a very long bar, which is a must for most of us alcoholics and they have some great outside seating on Main St if you’re staying for dinner.

We went with the bbq chicken pizza as suggested by one of the 3 owners we talked to. All three owners are great to talk to and it was here we learned that there IPA had placed 2nd, their Seaward Golden had placed 2nd, and their Porter placed 3rd. This is a really great accomplishment because there are a lot of beers in this competition, so to place this high with not one, but 3 beers, deserves the big thumbs up. Just for the beer and atmosphere alone I’d say you gotta pop in and have a drink. 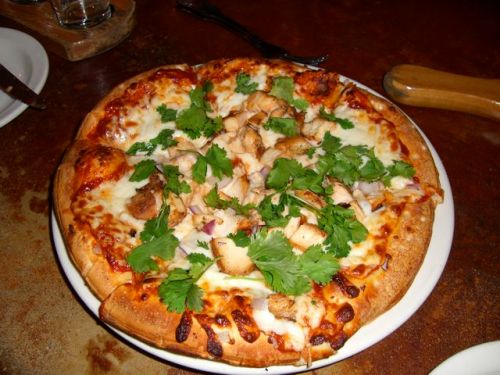 The bbq pizza was adequate. It’s not the best pizza you’re ever going to eat, but they give you plenty of chicken. The cheese is strong and fragrant and the sauce has a really good tang that sneaks up on you like a ninja with Dr Scholl’s in his shoes. The one suggestion I would make is that they dice up the cilantro. It was more like some one just shook it over the pizza and when you ate it you were eating full leaves.

The size is good for an appetizer but its priced closer to a full fledged pizza. So if you get one, don’t share.

Anacapa is a great place to hang out and drink in Ventura. The beer is great, they have new brews all the time, a few TV’s and a great atmosphere. The owners are knowledgeable and friendly and pour like Jedi masters. As a place to get your nights off to a good start, Anacapa gets the EatMeCalifornia high five of approval.

6 responses to “Shamon to Anacapa Brewery!”