Well it appears out of all the episodes to miss last weeks was the best one.  I was able to watch it before “Lockout” started and realized I didn’t miss all that much.  This episode finds us almost to the mid-way point of opi season.  Captains are fighting Mother Nature and she has been taking kung fu. 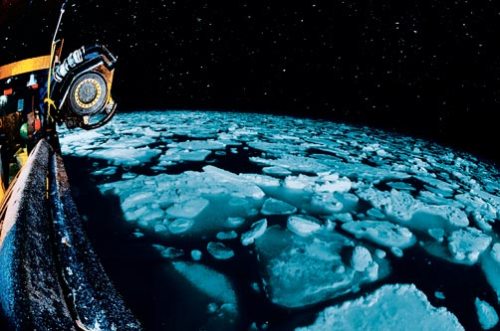 We start things off with the Wizard.  Captain Keith is back out on the grounds, trying to relax after running into mother natures round house kick.  The Bering seas took Captain Keith’s brother out of the season by busting a couple of his ribs.  Luckily, Lenny comes out of retirement to help the Wizard complete its opi run.  However, even with Lenny back, Captain Keith can’t seem to recover from a couple of poor choices he made the last trip out.  Lenny gets knocked down by a large wave and Captain Keith calls them in.

The next day, with the weather a little better, the crew gets out there and starts finally catching some crab.  The only thing they have to weather now is a couple of sensitive greenhorns.  Josh takes offense to being called a little girl and walks off the deck.  Captain Keith is able to rally him a little, but he still thinks this is his last trip. Compared to what they could have called him, “little girl” seems pretty odd to get sensitive about.  I think this is just a case of someone who doesn’t like crab fishing and is kinda pissed at himself for signing up.  What a little girl.

On the Incentive, Captain Harry plays his harmonica for Poseidon in hopes of some full pots.  Unfortunately, Poseidon is more of a wood flute guy and just puts a few crabs in each pot.  To add insult to injury deckhand Doug is snapped by the pot line.  He seems to be able to rub some crab guts in it and move on.  Me?  I would have held myself and cried for a couple hours.

The Northwestern is steaming to the start of the ice pack in an attempt to retrieve their pots before they are lost to the ice.  Sig is able to get them over to the pots and even pulls up good numbers while retrieving them.  Hooking the pots becomes the issue because if you hook too much ice with the pot line you could lose the hook.  The Northwestern crew seem to get through it with little difficulty and soon begin a 79 hour shift pulling pots.

Captain Sig has some issues with tightness and pain in his chest and ribs but seems to curse it away.  Of course, being Sig, he states he has no time to be hurt or die so he also rubs some crab guts on it and keeps fishing.  Most of us would probably want to go get checked out, but Sig doesn’t even tell his brother or his crew.  Instead, he just throws a few f-bombs at the problem and moves on.

Captain Phil has his hands full trying to get to St. Paul.  He’s got his twin 900hp engines working in the red, to push through huge chucks of ice, in hopes of getting safely into dock.  He’s got a boat full of crab and a slow leak in the main pipe that cycles water to the crab tanks.  It becomes a large leak when the engineer tries to stop it, but with some help from the crew, he’s able to get a grip on it.

What the engineer can’t handle is the oil that begins to leave the port engine as Captain Phil pushes the boat to its limits.  Luckily, Captain Phil makes it into St. Paul to make some much needed repairs.  St. Paul seems to like Phil just a little too much as it freezes and traps the Cornelia Marie at the dock. Phil has to wait 5 days before the mechanic finally figures out what’s wrong and gets the engine going again.  Phil’s heart and nerves are put to the test as he slowly push’s through the ice to get to his gear before it’s eaten by the Bering Sea ice pack.

Northwestern is on top, followed by the Incentive, Time Bandit, Cornelia Marie, and bringing up the basement, the Wizard.