The 2009 opilio crab season is beginning.   It’s winter in the Bering Sea and this is when Deadliest Catch is at its deadliest.  For those of you who are on your first season of the Catch, this is the time of year in the Bering Sea where the ocean is at its roughest, the winds are at their strongest, and the weather is at its coldest.  As the water and rain hit the boat it freezes to the entire outside of the ship.  Even the ocean spray freezes immediately to the pots and the deck.  You will see the crews constantly hammering ice off the ships because as we all know when water freezes, much like me after a Vegas buffet, it gets damn heavy.

To make up for the harsh environment Captains add 1 – 2 extra crew members and take fewer pots.  Spray freezes to the pots, so if a boat were to take a full stack, it would be in danger of rolling over because of the added weight of the ice.  Most ships take a third of the normal amount.

You first timers will also note that the crab they are catching is much smaller.  Unlike the king crab, the opi is tiny, so a good pot full is usually 150-200.  Captains will also risk venturing near the ice pack, which is forever in motion in the Bering Sea.  But if you set pots too close to the ice pack and it shifts, your gear will be swallowed by it and lost forever. 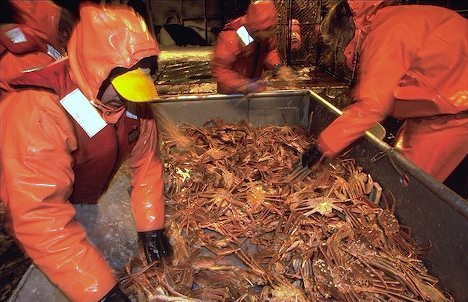 On to Deadliest Catch:

The Time Bandit starts things off light hearted, as they get a bit of payback on Jake from the Northwestern.  Not too long ago, Jake had snuck onto the Bandit and stole Captain Jonathan’s USA jacket.  Jake is caught giving the jacket back, duct taped to a hook with a dummy of him and dipped into the freezing Bering Sea.  I personally would have mailed the jacket to him; the Time Bandit boys are known for pranking and will always one up you.

They hire on Big John as an extra hand and get out to the grounds with Captain Andy at the helm.  They get their first pots dropped and pull up very low numbers.  30’s are ok for king crab bad for opi’s.

Our boys on the Northwestern are docked for a bit while the weather keeps Captain Sig from flying in.  We learn that at the end of king crab season Jake got a bump to full share, which is a huge raise.  Once Sig gets in, the first thing he does is consult with the Captains on the ice pack and remove pots from his boat.

They move out 70 miles from the ice pack and prepare to drop pots.  First, tradition demands that someone bites the head off a herring as the Hansen’s grandfather used to do.  Edgar microwaves one and then Jake is the first to take a bite.  He bites it off and immediately repaints the deck with his vomit.  Edgar, who is usually the one who does it, has no issues.  The pots are then dropped and they are under way.

One of our favorite Captains is back on the Cornelia Marie.  Captain Phil makes his return after being medically held off the boat because of a blood clot.  It’s good having him back at the helm and we wish him good luck!  He’s always been one of my personal favorites.

We have a new engineer as well, as Murray wont be along and may be retiring.  This is a big hit for the CM as he knew the boat better then any other.  New engineer Steve comes aboard and immediately is at work.  The CM is leaking fuel, has a busted propeller, and the hydraulics’ are filling with water.  The repairs keep the CM in dry dock for 3-days before they can get out to the grounds and begin setting their first pots.

The Wizard, originally the first to head out to the crab grounds, ends up having issues in the harbor.  The engines shut down and the boat loses all power and is set adrift towards the shore.  Captain Keith immediately calls for help as his brother works below trying to get the engines going.  If it were me, I’d pretty much shit in my pants, but Captain Keith and Monty handle the pressure and get the boat going again.  Then they head straight for Dutch Harbor to figure out what’s going on.

Captain Keith finds out there is air in the fuel system and leaks in the fuel tanks causing them to be delayed right next to the Cornelia Marie.  After some spot welding inside a fuel tank the Wizard is off and running.

Captain Keith is actually leaving dock with most of his pots which is very dangerous.  The plan to combat the icing is this tarp that supposedly keeps spray from freezing onto the pots.  As it turns out, when it comes time to put up the tarp the seas and the high winds prevent the crew from getting it into position.  We are then left with one of the greatest shots I’ve seen on the Catch.  As Captain Keith yells for everyone to get off the stack, a huge wave crashes over the bow of the ship covering the boys in water so bad that we can’t even see them.  It’s in slow motion and as the water covers the bow we watch in awe as the deckhand on top of the stack is swallowed by the ocean.

This is going to be a great opi season.