B and I hit up our third pizza joint.  A place called Bottleworks on the East end of Ventura.  Most of the pizza’s so far have been mediocre, so we were hoping Bottleworks would break the mold.

Bottleworks – Ventura, at the intersection of  Telephone Rd. & Petit Ave

Just one corner to give you an idea.

We hit up Bottleworks around lunchtime.  B got there ahead of me and the owner was nice enough to share his paper, so B could check out the brackets for this year’s tourney.  I was running late because I was stuck behind a big rig stuck in the intersection a few miles away.  It was one of those big ass lemon trucks.  I always wanted to get caught behind like a truck carrying chickens crashing into a truck carrying wolverines.  I think the combo would be more entertaining.  There’s nothing entertaining about a bunch of lemons.  Though it did make the air smell like lemon pledge.

The owner at Bottleworks is a great guy and we actually didn’t order for a bit ’cause we were busy talkin sports.

We ordered the cheese stick dippers to start which the owner actually gave to us right when we ordered them.  Apparently he had an order ready for someone who had not arrived yet.  It was very cool.  Then we ordered the standard PMS chart pizza.  Pepperoni, mushroom and sausage.  This time we had a place that had meatballs on the menu so we got those on it as well.

The cheese sticks were good.  They use a great cheese at Bottleworks that makes for a very tasty appetizer.  We got ranch and a hot wing sauce to dip it in because B asked for something spicy.  Not sure why he gave us hot wing sauce, because they do have a spicy pizza sauce listed on the menu.

The pizza came next and the presentation is great. 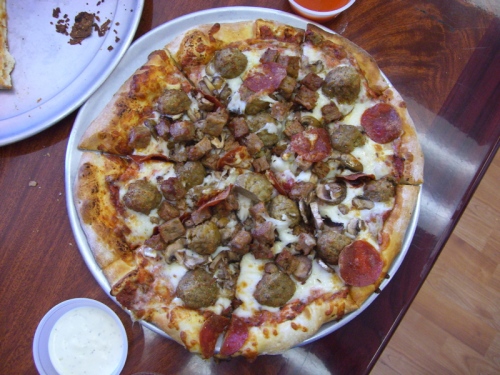 Look at those toppings

Here is my score:

Dough: (6)  The dough isn’t bad but there’s not much to speak of either.  It’s a thin crust which is fine.  Thin crust makes a great pizza.  There’s just not enough flavor to give it a higher point value.

Sauce: (4)  This one was hard to judge because there was not any on the pizza. Minus a few small pockets, it was like looking for a Condor in east LA.

Cheese: (9)  I like the cheese they use.  Plus they give you plenty of it.  It goes great with the toppings and holds them well.  Great twist of garlic in there too, which makes the cheese even better.

Toppings: (9)  I like all of the toppings a lot.  The mushrooms had a great flavor.  The Italian sausage was full and juicy.  The pepperoni wasn’t horribly greasy and had a great flavor, and the meatball wasn’t too bad either.

Overall: (8)  The owner is great, and it’s him that really boosts this place for me.  The pizza is good but the owner makes it better just because he’s great.  This is the kinda place you wanna hit for Monday night football.  They have a lot of TV’s, the owner knows his sports, the pizza is good, and they have beer that comes in friggin’ frozen schooners.  It doesn’t get any better then big ass frozen schooners.  Plus, there’s arcade games and stuff for the kids to play while mom and dad get tanked with friggin’ big ass beer schooners.

Sauce – None to speak of, had some pockets up near the crust, really needed more. (5)

Dough – Not overcooked, basically a conveyer belt for the toppings and cheese. (6)

Toppings – Plenty of em, least impressed with the meatball, liked the sausage. (9)

Overall – The place made me like the pizza, not the opposite. Good value and a nice relaxing place to have a meal. Plenty of TVs for the sports fans. (10, I’m compensating here because I actually liked this place.)

Cheesy Bread was good, should have had some of the pizza sauce to try with it instead of ranch, but I’m not a clairvoyant.

Ambience was good, not too busy, nice and light, plenty of games, good for kids.

Owner was nice guy, very social, gave me his copy of the Times while I was waiting on Mikey’s slow ass.

Total score: 75 – Casino, One of our highest scoring pizzas so far. I’m thinking some more sauce and we would definatley be close to a Goodfellas.

One response to “Bottleworks Pizza”