So I went to Brent’s Deli in Westlake Village this morning, hoping to ease my way off the vegan bandwagon.  I was in the mood for an omelette, and since I’ve been to Brent’s quite a few times over the years, I figured it was as good a choice as any.  As it turns out, I couldn’t have been more wrong. 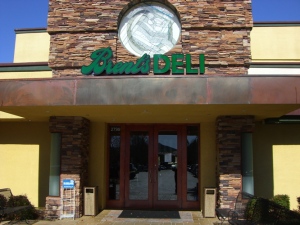 So I saddled up to the counter with their big menu and began to look at my omelette options.  After sitting there with a lost look on my face for what seemed like 10 minutes, a waitress finally came over and took my order.  It wasn’t busy in there at all, but maybe she was just letting me work through the 20 or so omelettes on the menu before approaching.  Anyway, she was nice enough, and I decided to order the Spinach omelette with mushrooms, onion and jack cheese on top.

While I waited, I took a look around and snapped a picture of the inside of the restaurant.  I really think this place is the best looking deli I’ve ever been inside.  Unfortunately, that doesn’t always indicate that the food is good.

I was hungry, really hungry, Somalian belly bulge hungry.  But since I have been eating vegan lately, I decided to forgo the meat and stick to veggies and cheese on my omelette.  I guess I never really considered how much meat adds to the flavor of an omelette, but without it, I found the dish to be pretty bland.

It came out pretty fast though, which was impressive.  However, the look of it wasn’t exactly the most appealing thing I’ve ever seen.

Like I said, the dish was pretty bland.  In fact, without the cheese, the omelette would have had no moisture at all.  They absolutely obliterated the eggs.  The middle of the dish was good.  It had moisture, flavor and texture.  But the edges almost seemed powdery.

As far as the “home fries” are concerned, they were the most pathetic attempt I’ve ever experienced.  They had no flavor whatsoever.  The stuff you get shredded in the frozen food section at Vons is better.  They tasted like they were boiled in a pot and then flash fried with no oil, salt or anything that could be considered seasoning.  Maybe it’s just me, but I thought real home fries were supposed to have peppers or onion or I dunno, flavor.  After 1/3 of the fries and 1/2 a salt shaker, I just gave up.

I made it through about 2/3 of the omelette and decided to give the wheat toast a try.  It was lightly toasted and I was really enjoying it right up to the point when a 2 inch white hair got stuck in my teeth.  For those of you who know me, you already realize that not only do I not have white hair, I don’t have hair at all.

I didn’t get a picture of the hair because I didn’t want to be a dick in front of the waitress.  She offered to get me new toast, but my stomach had already gone south on me.  I just paid the check, through a few bucks down on the counter and got the hell outta dodge.

Now that I have had some time to collect my thoughts, I have an illustration that I believe accurately depicts how I was feeling at that particular moment. 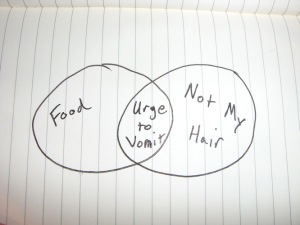 It’s gonna take some time for me to get over this one.  If anyone has any suggestions for where I can get some deli therapy, leave ’em in the comments.

12 responses to “My Deli-cate Stomach”