Back in action at El Pescador

First off, many thanks to my boy B for taking over for a few days while I dealt with some business.  As it turns out I’m not a direct descendant of Elvis Presley.  Oh well on to El Pescador. 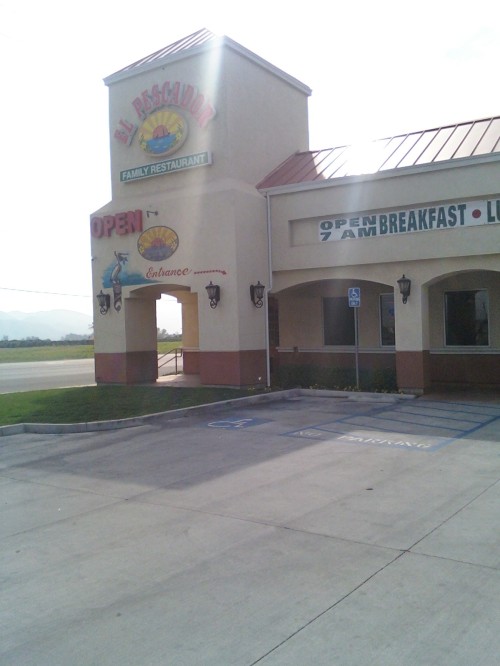 I had to take a trip down to Valencia and on my way home, off the 126 in Fillmore, was this Mexican restaurant called El Pescador.  El Pescador has been owned by the Ortiz family since 1983.

On the outside it looks like it would be fairly large, like an El Torito, but once you get inside it’s kinda like a mini El Torito.  It’s more modern than Mexican, as much of your classic mission style restaurant fare is not present. I kinda wandered in the wrong door because nobody was there to seat me.  Once I got into the mainstream portion of the dining room they told me to sit anywhere.  Now either I’m getting to large for life, or their booths were a bit tight.  I was back to table and had to shimmy inside like I was playing twister.

Once I greased myself up and squeezed in, the hostess brought me some chips and salsa. The chips crunched a bit stale, almost as if they were yesterdays chips but the salsa was high octane and very tasty.

So obviously if you’ve taken any Spanish you realize there are a lot of fish dishes here.  I didn’t feel like eating fish but because it was Fillmore which, as many of you know, is nowhere near an ocean, I had to try some.  The menu is actually kinda hard to read, they have tons of food pictures, and the Spanish is in cursive in a hard to read color scheme.

Once I translated it I ordered a shrimp cocktail, beef enchilada, chicken taco, and a fish taco.  I received the shrimp taco first and got a surprise soup that either I missed on the menu or they were just letting me try.  I’ve had Albondigas soup (or Meatball Soup for whitey) before, but this was excellent.  The flavors were perfect, diced with huge sliced carrots, parsley and onion.  It was actually my favorite part of the lunch.

The shrimp cocktail was okay, not as good as say Longboards, in SB, but better then a Marie Calendars or Carrows.

The entrée came out muy rapido. So fast, in fact, that I didn’t even have time to finish the small bowl of soup.  By the time I got to it, it had been reduced from hot to warm.

The fish taco was first up, and like the shrimp, it was okay.  You can get the same taco at a one of those mall taco stands.  The chicken taco was actually pretty good.  The chicken was marinated and cooked wonderfully, great full bodied shredded cheese on top and a crisp shell.  The beef enchilada was okay.  The sauce was pretty flavorful.  You could detect the jalapeno and chili, and it stood out without being overbearing.  The beef was a bit stagnant for me.  It didn’t seem like fresh shredded beef.  It was more like they found the cow that is out in the field playing bingo and watching murder she wrote.  It was a bit dry and old.

The beans were good, and the rice was good too.  They actually give you peas in your rice which is kinda cool. Maybe not for you, but I kinda dig peas so it made me smile.

The service was pretty good up until I got the entrée.  Then my waiter kinda disappeared.  They have a really cool feature at the table: a buzzer for your waiter.  You hit it and your table number pops up on the wall and they come over.  I think that they have gotten used to waiting for the bell however so if you don’t give them their pavlovian bell ring they don’t come to see you.

One other thing that kinda bugged me was that they have these TV screens that show dinners and other dishes they serve there.  I always think that’s kinda tacky.  In between watching slides of their dishes you get great telemundo music videos.

Overall, they are definitely worth the stop though.  They have a full bar, so if your coming back from Magic Mountain you can get on one last ride.  If you’re heading south from Ventura they are on the left hand side.

6 responses to “Back in action at El Pescador”