We left off last week with a 40 ft wave crashing into the Wizard while they were trying to put the tarp over the front pots.  The wave consumed the front of the ship and the deck hands all disappeared into white water.  We were left wondering if anyone was hurt, or even worse, swept off the ship.

Cue Bon Jovi and do your best Captain Sig “I’m on the crab” celebration……..

After the wave hits, Captain Keith is in the wheelhouse of the Wizard wondering what happened to his crew.  He tries, in vain, to call the deck, but nobody is picking up the line.  Finally he starts to make his way down.  Monty is one of the first to emerge.  He was swept up and slammed into the drag anchor and thinks he may have busted a rib or two.  Lynn and another deck hand were slammed down, face first, and already their faces and eyes have begun to swell.  Captain Keith and the others get the injured men below deck and make the trip back to the harbor.  Crab boats are very limited as to what kind of injuries they can work on, so these guys just steam back and get the injured to an emergency room.  We find out Monty has indeed busted ribs and his opi season is over.  The other men are treated and we’ll see who makes it back to the Wizard next week.

The boys on the Time Bandit have started the season slowly.  Captain Andy has been pulling low numbers and has almost exhausted his known family fishing grounds.  Most of the crab they catch, they end up rail dumping.  This basically means they bring it up then open the pot over the ocean and dump it back.  This occurs when most of the crab they bring up are females and would be too much time to sort through.  They bring out the dummy they made of Jake from the Northwestern and light it on fire, thinking it was the Nortwestern jacket causing their bad luck.  A burnt Jake dummy and a cruise over to what the family calls the Butt Cheeks, because of the formation it makes on their screen, ends up putting them on the crab as they bring up a pot that is three quarters full.  It’s here that we learn what a crabalanch is – a pot full of crab falling onto happy deck hands. 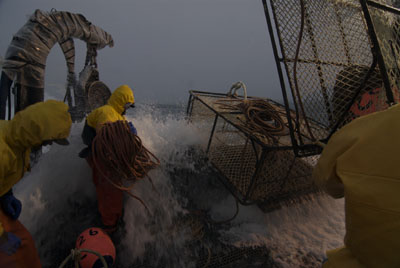 We only get a little peek onto the Northwestern, who are fishing 55 miles off the ice pack and are on the crab.  Their only issue is having to pull and sort in a ditch.  A ditch is when the boat is sideways to the swells and the men are exposed to water coming over the sides.  The Hansens seem to be handling everything just fine and are chugging along.

On the Cornelia Marie the weather has turned even colder in the Bering Sea as it hovers at a very breezy, tropical, 14 degrees.  They begin hammering ice blocks off the boat and working pots on a 14 hour soak.  Besides a little fighting between the new engineer and the Harris brothers, Phil is on the crab and things are finally starting to look up.  Jake gets a scare when a pot line grabs his ankle, dragging him toward the rail.  His brother and the other deck hand get to him fast and make sure he is not pulled over the side by the 800lb pot.  It was a very close call.

We have a new boat joining the fleet: the 103 foot Incentive.  The Incentive looks small, but actually has a very large hold and a great sorting platform with an opi river included.  An opi river is a shoot with running water used for sorting the crab, making the crew much faster because they do not have to fill and then dump.  Captain Harry runs the crew and they have already started off really well, pulling up large numbers.  It’s here that we learn a new term.  On the Incentive, when they pull up a pot with 500 or more crab it is called a “Shoo Mama,”  which, to me, is a better term for trying to get your mom to stop going through your closet, ’cause she’s looking for the playboys you already moved to your best friend’s house.  We also learn another great turn of phrase, which I will end this Catch recap with:

Crab Totals: The Incentive is on top, with the Cornelia Marie in the basement, but Captain Phil just got on the crab……..